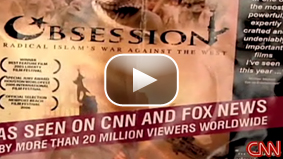 On a Sunday morning just weeks before the presidential election, Priscilla Linsley opened up her local Denver newspaper to find a copy inside of the film Obsession: Radical Islam's War Against the West.

"I was shocked at the content...and horrified that this had been in my Sunday paper," said the 74-year-old Democrat who watched about half the video before tossing it in the trash.

Rima Barakat Sinclair who is both Republican and Muslim was so angry, she called her local Denver lawmakers. "It is riddled not only with misleading facts but outright fabrication," she says.

Last month, some 28 million Obsession DVD's, made by Israeli filmmaker Raphael Shore, were distributed as advertising-inserts in 70 papers primarily in critical swing states including Colorado, Florida, and Ohio.

All of it was paid for by the Clarion Fund, a non-profit group established by the Israeli filmmaker with the stated goal of exposing the threat of radical Islam. Clarion spokesman Gregory Ross says, "Our focus is to educate with our movies and raise awareness NOT influence elections." The Clarion Fund was created in 2006, the same year Obsession was first released.

However, Larry Sabato, a political observer and Director of the Center for Politics at the University of Virginia, says it's naive to think such a video won't influence undecided voters: "It's pretty obvious that the group sponsoring it wants people to think more about terrorism, about national security, about Middle East politics and maybe less about the economy. Well, that obviously favors one side, the Republicans." And because a number of Americans still believe incorrectly that Barack Obama is a Muslim, political observers believe this DVD plays directly into that misperception.

Clarion says neither the McCain nor Obama campaigns had anything to do with the DVD campaign, which has outraged some Muslim groups.

Nihad Awad, executive director of the Council on American Islamic Relations (CAIR), calls the film anti-Muslim and politically motivated. Holding up promotional material that came with the video, Awad points out, "It says clearly that, 'It's our responsibility to ensure that we can all make an informed vote in November...'

CAIR, which includes some Democrat donors, has filed complaints with the IRS & Federal Elections Commission saying Clarion has violated its tax-exempt status. Clarion will not say who its donors are or how much they are giving. And a records search comes up empty.

Muslim advocates from CAIR claim the money is coming from the prominent Jewish educational group Aish Hatorah, headquarterd in Israel. "It seems that this campaign is well funded and directed by a foreign entity to influence the US Presidential elections," Awad claims.

Clarion's spokesman calls that report "totally ludicrous." Ross says "we do not accept donations from foreign entities. The accusations by CAIR are totally unfounded. We are responding to the FEC complaint, however there is no substance to that whatsoever."

The group Aish Hatorah denies donating any money to Clarion for its DVD campaign - though a spokesman does say the filmmaker Raphael Shore and other Clarion staffers worked for Aish Hatorah. Shore's brother, Rabbi Ephraim Shore, is listed as an executive with the organization.

Clarion will soon release its newest film, The Third Jihad, narrated by M. Zuhdi Jasser, president of the American Islamic Forum for Democracy. Jasser, who describes himself as a devoted, peace-loving Muslim, says, "It's always interesting how the Islamist organizations that have a certain political agenda claim victimology and yet they always want to attack the messenger, rather than dealing with the message."

Jasser says groups like CAIR should "condemn not only terrorism as an action, but the goals of the Islamic state and what Islamists would do if they were a majority and name Hezbollah, Hamas, and other terrorist organizations by name."

As for Rima Barakat Sinclair, who received the DVD, she says newspapers should have had known better than to include it in their deliveries: "If this DVD was produced en masse, distributed by the KKK or an anti-semitic organization, would it be included? Or rejected, rightfully so. "

Priscilla Linsley agrees and says papers at least should have made it clear the DVD was part of an ad campaign and not an editorial decision on the part of the newspapers.

The FEC and IRS declined to comment on the specific case but tell CNN they investigate all complaints.