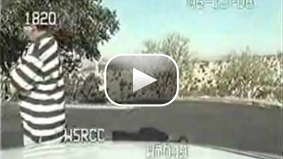 Watch the video, And be warned. A man will die.

But the story isn’t so much what you will see on the tape. It’s what led up to it.

A suspect wanted for a theft charge is killed in a hail of bullets from a police officer.

The images of the fatal confrontation were shown to a grand jury in El Paso, Texas.

The officer, Matthew Jones, was cleared of any wrongdoing and was not indicted in connection with the deadly encounter.

The reason? The suspect, Gregory T. Smith, threatened Jones with what the officer thought was a real revolver. It turned out to be a toy gun.

The incident happened on the morning of July 13th. On the dash-cam recording, Smith is seen standing in front of the patrol car. According to investigators, Smith was wanted for a property crime, but refused to surrender to Jones.

The video then appears to show Jones brandishing the gun at the officer. The suspect then leaves the frame, only to reappear apparently pointing the weapon at Jones. The officer fired several rounds at Smith. Authorities say Smith was shot 11 times. However, it was concluded that Jones reasonably believed Smith posed a lethal threat to him and his actions were justified.

Others disagree, and believe the officer's response to the situation was excessive, and should have used more restraint.

What do you think? Justified or not?