"Schlep" out the vote 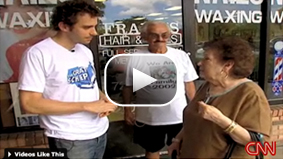 Mike Bender is young, single. He writes for television and movies out in California. I met him last Thursday night when he flew into Miami from Los Angeles. He had made the trip, at his own expense, to talk politics face to face with his Jewish grandparents Selma and Kenny Furst. More precisely, he came to talk Selma and Kenny into voting for Barack Obama. He had to try he said to bridge the “generation gap” between them. Bender had come to Miami in response to a You-Tube challenge called “The Great Schlep”. I’ll get back to Bender and his schlep in a moment.

When I first heard about this schlep thing I thought it must be a spoof. The comic, Sarah Silverman on You-Tube was rallying young Jews to go down to Florida and convince their Grandparents they had to vote for Barack Obama. The bit was called “The Great Schlep.”

Schlep is a Yiddish word that can have a variety of meanings. In this case schlep means to drag yourself. In other words, it may be difficult but, you’ve got to do it.

Well, it turned out the video was no joke. An organization called “Jews Vote” is in fact behind the video and the effort. They targeted this long Columbus Day weekend for the first “Big Schlep.” Using the grandkids to get to the grandparents made perfect sense says Organizer Ari Wallach, “If you really want to talk to them in a way that will bring them over to the Obama side you want to do it one to one. And the best way to do one to one is with people they know, ideally people they love. And grandparents love no one more than their grand kids. “

So, that’s what brought Mike Bender to Florida. He said he had wanted to do something to get involved in an effort to elect Barack Obama. This he decided was perfect. Long before the “Great Schlep” idea surfaced Bender had been trying in many long distance phone conversations to convince them to vote for Obama. He told me, “I have been working on this since Thanksgiving of last year. Will it be easy? No.”

Why not? There are about 650,000 Jews in Florida. Generally, most vote democratic. But many, especially seniors, are unsure of Obama’s commitment to Israel. Race is an issue too. I was surprised at just how candid Mike’s grandparents were. Selma told me, “Somebody said to me. ‘What to you object about him?’ I said well truthfully, our colors are different.” For Selma it went back to where she was raised, “I grew up with Jewish people and Italian people but I never lived in a neighborhood that was black.” Selma said she even thought about just not voting.

What Mike didn’t know was that all his telephone conversations with his grandparents had paid off before he walked in the door. Both Selma and Kenny had decided that if Mike believed they should vote for Obama they would because they said it’s Mike’s world now and his generation has to make the most of it. Selma added, “I’m kind of changing my old mind and saying to myself people are people and it’s not what their color is it’s what their body is.”

Mike Bender’s schlep weekend was not done. With his grandparents on board, he moved on to their friends. First he went to a local deli where the owner asked him to leave. Some of the patrons didn’t want him in there talking politics. On he moved to the beauty salon where he grandmother at age 87 still works doing nails. There was a different reception here. They all wanted to meet Selma’s successful writer grandson. And they were open to his Obama pitch. He spent much of the time explaining how he believes Obama is a good friend to Israel.

The organizers of the Great Schlep say about one hundred young Jews came to Florida over the holiday weekend. Another one hundred went to other battleground states. They’re even planning now to translate the Sarah Silverman Schlep video into Spanish. And they say they expect young schleppers to continue schlepping to battleground states right up until the election.

Check out our Snapshots from the ‘Schlep’