Presidential health and your vote 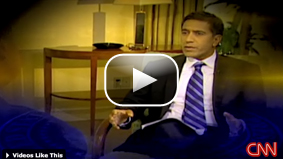 CNN's Dr. Sanjay Gupta uncovers the health secrets of presidents past and future.

A few weeks ago I saw something extraordinary: the medical planning book for one of President Bush’s presidential trips. It was almost three dozen pages. Not a briefing book, not a policy paper, just collected medical information, itineraries, routes and contact information for every possible specialist who might be in the area. What was really extraordinary is that this was no special moment – just a simple day trip, a half-day of official business in another state.

The stakes are high, but presidents are flesh and blood, subject to the same ailments as the rest of us. It’s just that when the president gets sick, it can change the course of history. Franklin Roosevelt was suffering from congestive heart failure at the Yalta peace talks after World War Two. He died two months later. Some historians say he wasn’t thinking clearly – that he never would have given Joseph Stalin so much control over Eastern Europe if he weren’t so sick and physically weak. Of course we’ll never know for sure.