The verdicts are read in O.J. Simpson's armed robbery and kidnapping trail.

So no O.J. Media circus under bright lights, but instead a twisted sideshow seemingly rolled in off a flatbed truck with the freaks climbing onto the unpaved road.

The witness stand became the dimly lit stage for all manner of jaw-dropping mutants.
They took their turns - obscenity gushing gunmen, double-talking hucksters, fawning admirers.
All of them linked somehow to the formerly acquitted major football and minor acting star.
The witness stories meandered like ivy grows, just moving forward and tangled.
But the freaks told a tale that sent Simpson directly to jail, do not pass go and get the hell out of Judge Jackie Glass' courtroom.

Walk out of the wooden front doors room courtroom 15A and you look upon a picture postcard of the Las Vegas strip.

Simpson got no last look.

There was no last bombastic walk before the cameras in handcuffs either.

They hauled perhaps the world's most infamous defendant through a side door, a tunnel and into jail across the street.

The Friday Night in Las Vegas was warm and windy and filled with theories of superstition and bad karma.
A Las Vegas jury threw the book at Simpson, knocking him out exactly 13 years after he was acquitted of double murder.

There wasn't a black cat in the courtroom, but there was a blackout, a momentary flicker of darkness in the side show tent when the power went out.

END_OF_DOCUMENT_TOKEN_TO_BE_REPLACED

Wanted to share these images from the courthouse yesterday – to give you a behind the scenes look at what it was like covering the trial:

At most of O.J. Simpson's court dates many people with messages used the occasion to get attention from the media. But on verdict day the crowds were almost not-existent.
_____________________

Spaces on the closed street outside the Clark County Regional Justice Center were usually full for many of O.J. Simpson's court appearances. But when the case went to the jury much of the news media did not go to the courthouse leaving empty spaces.
_____________________

Simpson was tried and convicted in the Clark County Regional Justice Center's courtroom 15A, which has a view of the Las Vegas strip right outside the door. A view that was O.J. Simpson's last as a free man before he was convicted on 12 felony count Friday night.
_____________________

Although there was less media covering O.J. Simpson's third trial, reporters still had to work outside of the courtroom because of space limitations. 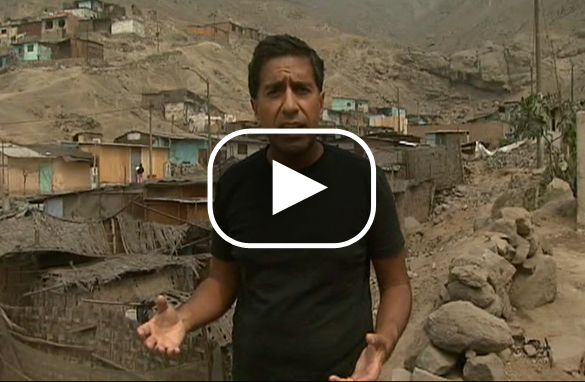 Dr. Sanjay Gupta takes us into a small village near Lima, Peru hospital where tuberculosis is running rampant, in part due to the impoverished living conditions. He looks at the work Partners in Health and the Peruvian government are doing to prevent and contain outbreaks of infectious diseases.