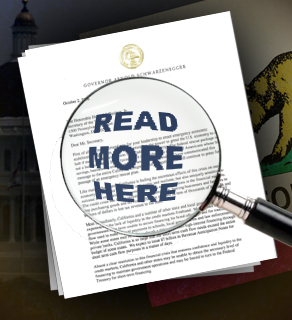 California Gov. Arnold Schwarzenegger, alarmed by the ongoing national financial crisis, warned Treasury Secretary Henry M. Paulson on Thursday that the state might need an emergency loan of as much as $7 billion from the federal government within weeks.

The warning comes as California is close to running out of cash to fund day-to-day government operations and is unable to access routine short-term loans that it typically relies on to remain solvent.

The state of California is the biggest of several governments nationwide that are being locked out of the bond market by the global credit crunch. If the state is unable to access the cash, administration officials say, payments to schools and other government entities could quickly be suspended and state employees could be laid off.

Plans by several state and local governments to borrow in recent days have been upended by the credit freeze. New Mexico was forced to put off a $500-million bond sale, Massachusetts had to pull the plug halfway into a $400-million offering, and Maine is considering canceling road projects that were to be funded with bonds.