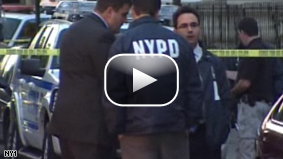 Lieutenant Involved In Taser Incident Takes His Own Life. Watch the report

Michael Pigott turned 46-years-old yesterday. But there will be no celebrations. Only mourning.
The veteran New York City police lieutenant committed suicide yesterday. According to investigators, Pigott shot himself in the head with a .9 mm gun.

His death comes on the same day that Iman Morales was laid to rest. The two men, their deaths, are linked by a singular devastating incident.

Last week, Morales stood naked on a security gate above a Brooklyn sidewalk. He was screaming, and seemingly emotionally unstable. Police responded to the disturbance and confronted the 35-year-old Morales, who was holding a long light bulb tube.

Pigott was the highest ranking officer on the scene. He ordered another cop to use a taser gun to subdue Morales. The jolt of electricity instantly stunned Morales, whose body became rigid. To the horror of onlookers, Morales tumbled head-first onto the pavement. One witness described it as a death fall. Morales was rushed to the hospital, where he died. The chilling episode was videotaped. You can watch it here but we must warn you the images are graphic, depicting a man’s final moments alive.

Following a departmental investigation, Pigott and the officer who fired the taser gun were re-assigned. According to published reports, Pigott was distraught over the death of Morales. Officials say he left a suicide note, but not reveal the contents of the letter.
In an article published in Newsday, Pigott spoke about the incident and the toll it had taken on him. “”I am truly sorry for what happened to Mr. Morales, he said. “I feel terrible about what happened to the man.”