The Next President: Debates – Round 1

Editor's Note: See highlights from the debate and get the best analysis with John King and the best political team on television. Watch the special The Next President: Debates – Round 1 Saturday at 10p ET and Sunday at 9p ET.
[cnn-photo-caption image=http://i2.cdn.turner.com/cnn/2008/images/09/27/art.debate1.jpg]
John King
CNN Chief National Correspondent

It was a highly anticipated moment – and turned out to be a dramatic study in both the substantive and stylistic differences between John McCain and Barack Obama.

On Iraq, Iran, Russia and many other international issues, not to mention the domestic economy and taxes and spending, the two nominees offer the American people a clear choice.

Whether the first presidential debate was a game-changer is the morning-after question, and on that there is of course a somewhat predictable partisan divide.

But, if you accept the tie goes to Obama rule, the view most heard in the hours after Friday night’s debate, from both Democrats and even many Republicans, was that the Democratic candidate had at a minimum held his own in a forum that was for the most part conducted on his Republican opponent’s turf.

Beyond that, I’ll leave scoring the debate to the partisans and the experts.

But a few observations...

END_OF_DOCUMENT_TOKEN_TO_BE_REPLACED 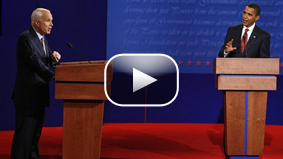