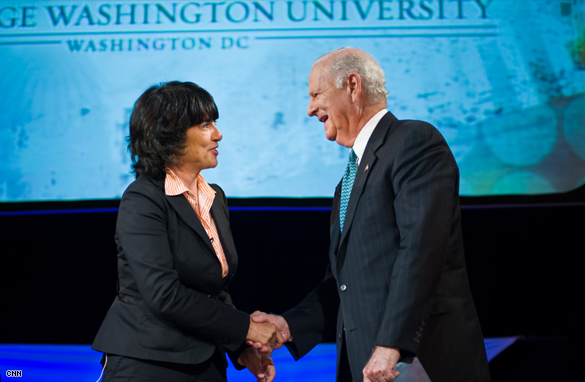 Christiane Amanpour: “The other thing we were talking about, with advice to the new president, is climate change... What does the United States need to do to take the lead on something that is so vital globally?”

James A. Baker III: “Kill all the cows ‘cause most of it comes from cow farts”

Christiane Amanpour: “We’re leaving that in…’

There was much humor splashed about the serious advice being dispensed, despite, or maybe because, of the unprecedented challenges on the next president’s plate.

The forum generated huge buzz on The George Washington University campus. Students started lining up at 5:30am for tickets which were free. Later, when the Secretaries walked on stage together, the auditorium rose in a standing ovation. This struck me profoundly.

I know ‘America’s foreign policy’ and ‘where in the world we are headed’ are vitally important questions, but I was gratified to see how many young people felt the same way.

America’s image, and therefore its influence abroad are at historic lows, and the Secretaries unanimously said the next U.S. President must immediately close Guantanamo Bay Prison and ban torture.

They were also unanimous about engaging Iran and seeking a new relationship, while at the same time making clear there would be zero tolerance for an Iranian nuclear threat. James Baker, who served as Secretary of State for the first President Bush said “I think a well-placed, quiet, private phone call to the Iranian leadership, if you can find out which leaders to talk to - to the effect, ‘Look, if you do so much as aim a missile or anything else toward Israel or toward US, our strategic nuclear deterrent can be re-aimed in 20 seconds,’ they would understand that, I think.”

I'm sure they would.

The secretaries also said reviving the Middle East Peace process would be a hard slog, but Baker said he believed there’s a deal waiting to be made with Syria which in turn would help the US with crises in Lebanon, the Palestinian territories and Iran.

One of the most interesting areas where they differed was Darfur and the question of Genocide. These hardened diplomats were torn – but they agreed that U.S. intervention was not in the cards. Even Secretary Powell who told us he had first called it genocide on behalf of the US government:

Colin Powell: “You look at something like Darfur, and it just breaks your heart. But the ultimate solution to the crisis in Darfur is political solution between the rebels and the government in Khartoum.”

Madeline Albright:” Well, I think it's in the U.S. national interests, in fact, to do something about humanitarian situations that lead to or are genocidal. And the question is how you get the will of the American people behind it. It is not easy. But I'll say this is, if you're the United States, you're damned if you do or damned if you don't. We intervened in Somalia, and people thought that was a mistake. We didn't intervene in Rwanda, and people thought that was a mistake.”

James A. Baker III: “When you formulate and implement foreign policy - and I bet you everybody here would agree with this - you have got to take America's principles and values into consideration. And we're talking here now about principles and values. But you also have to have a healthy dose of national interest involved, because otherwise you lose the support of the American people. Your foreign policy can only be sustained as long as you bring the American people along with it. They are the final arbiter of foreign policy in our democracy. We cannot be the policemen for the world.“

Yes, but Darfur is a big topic on US campuses, with a serious grass roots movement to stop the genocide there. When the Secretaries started laying this on “bringing the American people along”, I was sorely tempted to turn to the audience for a show of hands. I am sure there would have been an overwhelming call for action from the floor. I’m sorry I didn’t ask.