My trip to the bin Laden mansion 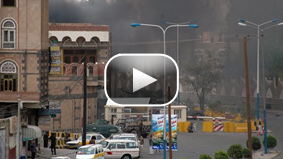 Video from Yemen TV shows burnt cars and blood on the ground following an attack on the U.S. Embassy.

After al Qaeda blew up the USS Cole in October 2000 killing seventeen American sailors, I visited Yemen to check out Osama bin ­Ladens’s ancestral village in the Hadramaut region, in the south of the country. His father, Mohammed, left there as a teenager in 1931 to seek his fortune in what is now Saudi Arabia.

I traveled through Wadi Doan, a 100 ­mile-­long valley in which the road is not much more than a rocky path. Black-­robed women flitted like wraiths down the alleys of the wadi towns, avoiding eye contact with foreigners. Out in the fields, women harvested crops while completely swathed in black, wearing distinctive conical hats made of straw. Attempts to photograph the Hadrami women produced such a volcanic explosion of rage by my local driver that I abandoned the enterprise.

The bin Laden village is tucked into the shade of honey-­colored cliffs that tower above the valley floor by a couple of thousand feet. It is a compact place, filled with laughing children who wander the streets between the high-­walled mud-­brick houses. The village is called al-Rubat ­Ba’eshn. There is a Bin Laden Street and a crumbling bin Laden mansion. There are even some bin Laden cousins who told me that they were not happy that the Americans on the Cole had been killed because they were “guests” of Yemen. 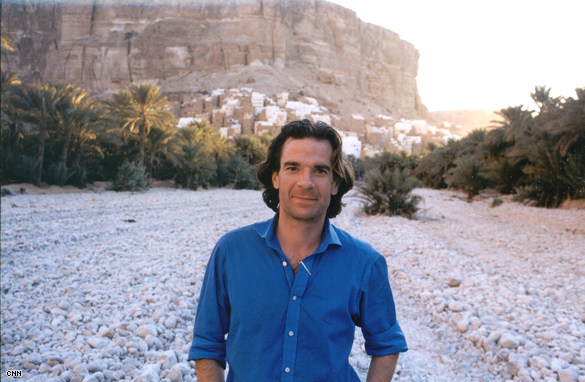 Peter Bergen outside the bin Laden family village in Yemen.

That, of course, represents the views of most Yemenis, yet Yemen, one of the poorest countries in the Arab world, has been an important center of al Qaeda activities for more a decade. A group with ties to al Qaeda kidnapped 16 western tourists in 1998, four of whom died in the “rescue” operation. (Memo to self: In the event of a kidnapping never get rescued by a Third World army.). That was followed in January 2000 by al Qaeda attempting to sink an American warship, the USS The Sullivans. That effort was unsuccessful and was followed nine months later by the Cole attack where suicide attackers piloting a bomb-laden boat blew a hole the size of a small house in the destroyer.

Since 9/11 the Yemeni government has attempted to crack down on its militants but this effort has been hampered by the fact that the central government is weak and doesn’t really control its own rugged, mountainous territory. Emblematic of that fact is that militants imprisoned for their roles in the Cole attack have escaped from Yemeni prison not once, but twice! Yemeni terrorists have also attacked ships off the coast of their country such as the attack on the French oil tanker, the Limburg, in 2002. In July 2007, terrorists killed eight Spanish tourists in the east of the country

Now comes the attack today at the U.S. Embassy, which is almost certainly the work of al Qaeda given the suicidal nature of the assault on the embassy compound which featured a car bomb and shooting by six militants who killed themselves and ten other Yemeni bystanders, but no Americans.

It is precisely this kind of attack in which Muslim civilians die that has led al Qaeda to lose much of it support in countries across the Islamic world. It will be interesting to see if a similar reaction now takes place in Yemen.