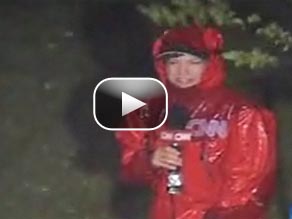 CNN's Susan Candiotti is nearly blown over as she reports on the conditions of Hurricane Ike.

The island is trashed with household items including refrigerators, grills, and furniture scattered about the island. A storm surge of up to 12 feet flooded the island - population of about 1,000.

The Surfside police chief tells us it's pretty devastated.

Chief Smith says the man who refused to leave the island is OK: "Roy Wilkinson? He's fine, sittin' on his front porch taking it all in."

Smith's own home, built just four months ago is standing. It's flooded on the ground-floor storage area. Living area above on stilts is mainly OK.

The chief says there was a suspected chemical leak at one of the many petrochemical plants in Clute and around the port of Freeport but it turned out to be false. He says there are no problems at any of the plants.

Crews are already trying to remove debris from beach roads.