Should I fly today? 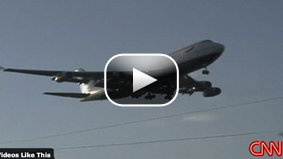 Watch Deborah Feyerick's report on the verdict of eight men who changed the way we fly.

I boarded a plane this morning in Des Moines, Iowa. The sun was barely up. For a split second I wondered whether I should fly today. It is, after all, September 11th. Seven years later. I wonder whether Al Qaeda might use today as a day to show the world they can still strike. I wonder if somehow flying today is disrespectful to the people who died seven years ago - people who started the day just like I did, wheeling a small suitcase through the airport just before dawn to get someplace else - people with plans on an ordinary day.

The security line is longer than I expect. TSA agents have created a window-box display showing items you can carry on and items you can’t– like full size shampoo, and Scope, and lotion - fixed behind glass like a piece of modern art. “Oh, I like that shampoo,” says the woman in front of me who then tosses a 20oz Pepsi into the gray, plastic bin and sends it through X-ray where it is promptly confiscated by a TSA agent wearing the new royal-blue TSA shirt.

I look around at my flying companions. I think two guys are military. For a split second I think they might be US Air Marshals – though it doesn’t much matter because looking at the rest of us they’re bigger, stronger and can likely take down anyone who moves towards the cockpit. I think about the passengers on United Flight 93 who fought back against the hijackers. USA Today has a front page interview with the flight controller who desperately tried getting other planes out of United 93’s flight path – the confusion, the disbelief, the shock of it all.

Two hours into my flight, the rising sun reflects off the clouds in a brilliant pattern and I think, “Two hours. We’re safe. We’re still flying straight.” I check the time – 9am New York time – minutes after the hijackers crashed the first plane into the North Tower seven years ago. I know the exact times because, like so many, I spent the next year living it every minute of every day.

The pilot’s voice comes over the speaker, “Those on the left can see Manhattan.” It’s been seven years. I’m almost used to the new skyline. The absence of the World Trade Center Towers doesn’t affect me as deeply as it once did. Still when I drive past the gaping hole where the towers once stood – it’s like an open wound cut into the once perfect landscape. I used to look for the Trade Center Towers to orient myself and figure out which way to walk. I don’t do that anymore.

My friends in law enforcement tell me it’s quiet, “Too quiet.” A terrorism expert in London reminds me, “Al Qaeda is patient. They have all the time in the world.” Seven years. I think of the babies who were just born then – like mine - now in elementary school. I think of all they’ve learned. I think of all they’ve missed. I wonder about the mothers, the wives, the fathers, the families. I wonder if they’re OK. I wonder if they were able to find the strength to rebuild. Maybe I should have stayed in Des Moines an extra day.