On 9/11, sunlight versus darkness

Editor's Note:
We are devoting many posts today to the anniversary of 9/11, with first-hand accounts, insight, and commentary dedicated to that day seven years ago that changed our world. 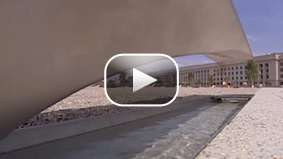 This week, the Pentagon's September 11th memorial will be dedicated to those lost in the attack. CNN's Barbara Starr reports.

Journalists are trained that most of the time, the world is gray. Nothing is black and white, there is always some nuance, or piece of context to report. We look for that little something of gray to help explain to our readers and viewers what is going on in the world. The color gray went away that day.

I have always thought I must have been the most clueless journalist in America that morning. I woke up early, saw the weather was absolutely gorgeous in Washington DC and thought only about how early I could sneak out of work since it was my birthday. The phone in the kitchen rang, a Pentagon source was telling me an unmanned drone had crashed a few hours earlier in Iraq. Still, on September 11, 2001, I thought, heck Iraq’s not really a big story, I can still get out early.

I was working as the Pentagon correspondent for ABC News, with the late Jack McWethy, broadcasting from the Pentagon press area along the famous E-ring of the building…home to offices of top generals, admirals, the Defense Secretary and the always cynical press corps.

The morning was beautiful, sunny and warm. I always wondered how America missed the clouds of horror that would explode two hours later. I think you had to be at one of the attack sites to really understand that feeling.

We watched on television as the first plane hit. Myself and several other journalists went into the office of one of our best military sources—a senior navy officer, all of us glued to the screen. The second plane hit, the navy captain turned ashen. We knew it was bad. It was about to get worse.

I starting back down the hall to the ABC office…but suddenly a Pentagon police was running down the hall yelling “Get out get out get out. We’ve been hit…Get out now!” In an instant, the hallway was full of people …Seventeen and half miles of Pentagon corridors, 20,000 people trying to get out.

Jack and I made our way to the nearest exit and found ourselves in a traffic jam of hundreds of people backed up in the hall…the doors had malfunctioned and slammed shut. They automatically had locked as part of the security system in an emergency. It was a long 30 seconds until they opened again.

The sunny morning was now dark where I stood on the attack site along with hundreds of others… Flames shot five stories into the air, the massive black clouds of smoke poured into that sunny blue sky, and for the first few minutes no help. Then of course, sirens screaming from everywhere. Fire trucks, police, federal agents, poured in. Local firemen from the surrounding Virginia suburbs were the first troops on this front line. Someone called for volunteers to help rescue victims. I watched as more than 100 military personnel who had just escaped from the Pentagon instantly surged forward…ready to go back into the flames. No one would be left behind. An Army general I knew well came up to me and said ‘we are at war.” I could only think this must have been the people felt at Pearl Harbor.

For emergency personnel, fighting the fire, tending to the dead and wounded would go on well into the next day. I saw body bags being carried out of the building by young soldiers. I would come to know Colonel Marilyn Wills who jumped out a second story window, flames at her back, lungs full of smoke into the arms of young Navy SEAL below who promised he would catch her and not let her fall. One man who didn’t make it: Max Bielke worked as an Army civilian. Thirty five years earlier, he was the last US combat soldier to leave Vietnam.

And there was a young Army soldier who crawled out of the flames and smoke with his buddies into the sunlight. But then he looked around and one man was missing. It was the mentally disabled man who worked as one of the custodians. He had been in the office cleaning when the plane hit, but hadn’t come out with them. The young man crawled back into the building’s wreckage. The man was curled up safe in a corner, but overwhelmed and unable to move. The young Army soldier instantly slung him over his back and carried him to safety off this battlefield.

On this day there were no shades of gray….heroes in the sunlight fought against the darkness. A few weeks later I joined CNN. I would find myself for the next nearly seven years reporting from the Hindu Kush of Afghanistan to Baghdad’s Green Zone to the borders of Somalia.. But every morning that I come to work here at the Pentagon I walk by the now rebuilt section of the building, always, remembering the 184 souls lost on a lovely sunny September morning.