Florida Keys: Getting away from the getaway

The allure of the florida keys has always been that its an escape.

Sapphire blue waters stretch endlessly into the horizon, on key west a wild chicken crossing the street can stop traffic.

But tourist Debbie Thomas found out that getting away from an escape can be even harder than getting to one.

Hurricane Ike cut thomas' vacation short. Instead of hitting the beaches or bars thomas spent hours sunday trying to get one of the last flights out.

"The hotels tell you you can't stay. Its stressfull," she said.

There's good reason the keys, a tourist mecca, is asking its visitors to leave.

Connected by a single road to the mainland the florida keys are isolated and lowlying, in some places just a few feet above sea level. They are perhaps the worse place in the world to weather a hurricane.

On Sunday, city officials and residents breathed a small sigh of relief that the keys are predicted to miss the worst of Ike. But there's always the possibility of a late shift in the storms track. And then there would be no place to escape.

The quiet before the storm... 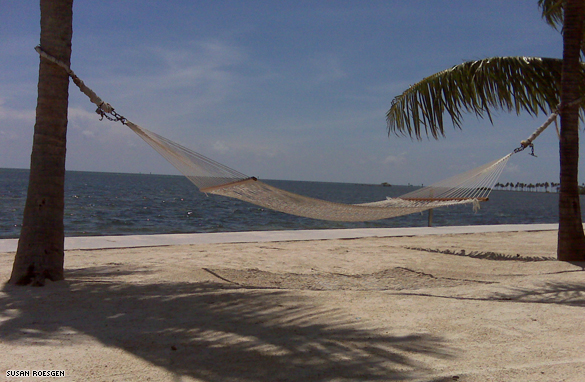 Another day in paradise!

This is on the beach in Islamorada... Look for this spot in our live shots...

Keeping an eye on Ike

I awoke to another day of clear blue skies and bright sunshine in Key Largo, FL. Today shows no signs of dangerous Ike lurking in the Caribbean, but talk of him is everywhere. At Harriet's, a popular breakfast restaurant known for their homemade biscuits, locals were abuzz.

Most of the servers we spoke to didn't plan on evacuating. One server, a teenage girl, was excited since school was cancelled. She said her family wasn't going to evacuate because their house was made of concrete and is located 10 feet above sea level. Local officials say the storm surge is expected to be 4 feet, so the teen and her family would presumably not be flooded.