Broken levees and saving a Cormorant

I went about and hour and a half south of New Orleans to check out a potentially serious levee breech in Plaquemines Parish. Photographer Leon Jobe and I got on an air boat with a local guy, Jimmy, and the parish's Coastal Management Director PJ Hahn. What we saw was a major collapse of the levee, but fortunately no homes in immediate danger.

On our way back to the car, Jimmy spotted a bird in distress. The cormorant, which looks a lot like a seagull, was desperately trying to stay afloat. It was wrapped up in debris from the water, and being eaten up by fire ants. PJ reached in and helped free the bird of the debris, and washed the fire ants off. He then tried to check and see if its wings were broken. Luckily, it looked as if the poor thing was just exhausted more than anything.

We took the boat back to the levee and dropped off the bird. Hopefully, the poor thing had time to rest and get back on his way.

Here's one more picture: me and "local guy" Jimmy on an air boat south of New Orleans. 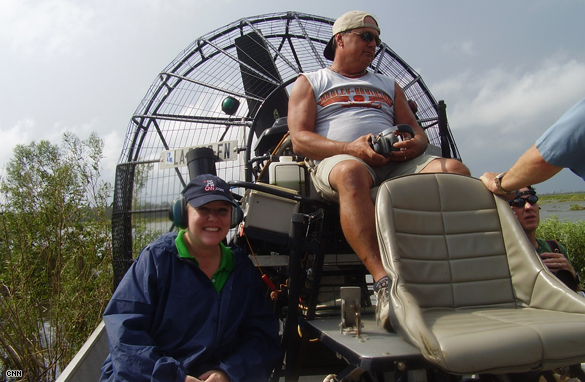