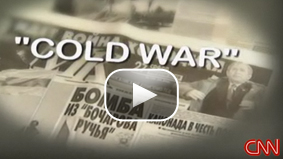 Russia is at odds with the west over Georgia, but is it a new Cold War? CNN's Robin Oakley weighs up the rhetoric.

Russian Prime Minister Vladimir Putin has accused the United States of orchestrating the conflict in Georgia to benefit one of its presidential election candidates.

In an exclusive interview with CNN's Matthew Chance in the Black Sea city of Sochi Thursday, Putin said the U.S. had encouraged Georgia to attack the autonomous region of South Ossetia.

Putin told CNN his defense officials had told him it was done to benefit a presidential candidate - Republican John McCain and Democrat Barack Obama are competing to succeed George W. Bush - although he presented no evidence to back it up.

"U.S. citizens were indeed in the area in conflict," Putin said. "They were acting in implementing those orders doing as they were ordered, and the only one who can give such orders is their leader."

"To suggest that the United States orchestrated this on behalf of a political candidate just sounds not rational," she said.