Behind the scenes at the CNN Grill 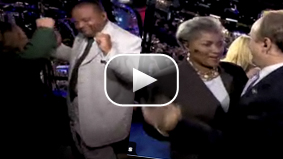 We’ve been working hard this week at the DNC, but with work comes a time to let loose. Roland Martin and Donna Brazile did the best job, dancing in the middle of the CNN Grill long after they went off the air. Since we didn’t have a camera able to tape it, you should check out Jeanne Moos’ report on all the convention dancing. You will get a good idea of what went down here last night.

It was a really interesting mix of people here, from Colorado Governor Bill Ritter’s sons, August and Abe, to Ashley Judd, Jamie Foxx and Days of Our Lives’ own Deidre Hall. Time’s Karen Tumulty, ABC’s Kate Snow, EXTRA’s Carlos Diaz and our own Campbell Brown, Wolf Blitzer and Anderson Cooper were spotted at various times throughout the night chatting up the various guests here. Speaker Nancy Pelosi made her way in for an interview and her staff wanted to come back. She, unfortunately, couldn’t make it due to other commitments. But Rep. Gary Ackerman of New York did make it, and he and his wife really enjoyed dinner as well as the atmosphere.

END_OF_DOCUMENT_TOKEN_TO_BE_REPLACED

Our Stage, Our Speech, Our Time

Yes, I did think this moment would happen. I believed that an aging, maturing democracy was capable of separating itself from race to evaluate the merits of an exemplary candidate. I believed that while the Clintons are formidable, my party would not resist the chance to capture lightning in a bottle. I believed from the first rumblings in Springfield, Ill. in February 2007, that the 2008 election is Barack Obama's time.

By now, most Americans are aware of the improbable historic accident of today, that Barack Obama's acceptance of the Democratic Party's nomination for president comes 45 years to the day after Rev. Martin Luther King Jr. delivered his "I Have a Dream" speech. The historic arc is stunning from any vantage point. But for black Americans, especially those in the post-civil rights generation, those who, like Obama, are beneficiaries of the struggle and inheritors of the dream, tonight is not merely a night to recognize how far we've come. It is a night very much about the arc forward from this moment.

What's really at stake in this election?

Conventions are about politics, not policies, so it's not surprising that we've lately been preoccupied with Hillary Clinton's body language and John McCain's real estate.

But it seems timely to offer a reminder that this election is really about something - about issues that will affect the lives of every American and, most likely, everyone in the world.

Presidential candidates are cagey about specifics, so here's some informed speculation about how the world might look differently if McCain or Barack Obama wins in November:

Obama has three clear priorities for his presidency. He wants to end the war in Iraq, he wants to undertake a major expansion of guaranteed health care, and he wants to change energy policy to lower our dependence on foreign oil and start to address global warming. Can he do any or all of these? 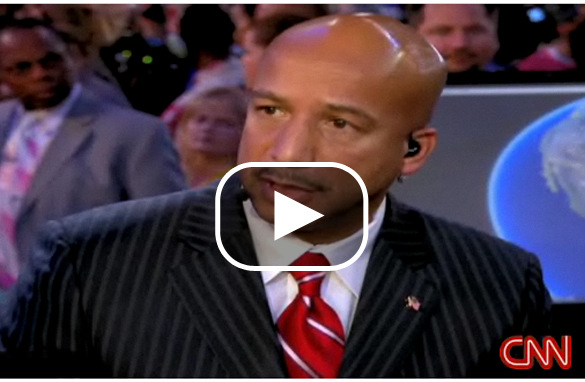 Anderson and the best political team on television sat down with New Orleans Mayor Ray Nagin last night to discuss his city's preparations for Gustav while attending the Democratic Convention.

The woman, a venture capitalist from the Denver area, looked a bit like Cindy McCain, and so it was disconcerting when she announced, in a focus group of undecided voters conducted by the Republican pollster Frank Luntz, that she had decided she just couldn't vote for John McCain this year. "I supported him enthusiastically in 2000, but he's hired the same people who ran him into the ground last time to run his campaign," she said. McCain's tone was more negative now. "It breaks my heart."

Most people don't care about the consultants a candidate hires — very few handlers achieve the celebrity status of a Karl Rove or a James Carville. Most voters who supported McCain in 2000 but not this year have more obvious gripes: they don't like the way he's shaved his policy positions to approach Republican dogma. They may remember that he opposed the Bush tax cuts before he favored them...

I am sitting at Mile High Stadium this morning. Got here at 1am local time to get ready to help John Roberts and American Morning start the CNN day. The stage is set – really – for Barack Obama's acceptance speech tonight.

But my eyes are on Gustav. The storm is spinning in the Caribbean, not sure where it will hit, or when. But it could be Monday, and it could be New Orleans, and that could be another disaster. I'm heading from Denver to New Orleans with Anderson tomorrow morning. We'll see what the new day brings.

The effects of Gustav could be felt as far north as Minneapolis. Not wind and rain, but attention on the storm could sap attention from the Republican Convention which starts Monday.

We hear that John McCain has decided on his running mate, but his pick does not know. That lucky person will get the call today. And my CNN friends say McCain will reveal his pick on Friday in Ohio.

And all that – Gustav and McCain – will fight for attention with Barack Obama's big night. The Democratic National Convention wraps up tonight with the now official Democratic presidential nominee addressing about 75,000 people at Invesco Field at Mile High.

Should be lots of fun.