Has Hillary changed any minds? 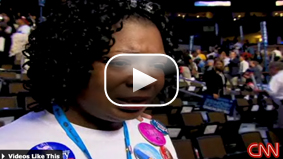 COOPER: Suzanne Malveaux is down on the floor with some very strong Hillary Clinton supporters. Apparently they had tears in their eyes during some parts of the speech. Suzanne, what are you hearing from them?

Tell me, why is this so important to you? What does this moment mean to you?

MALVEAUX: Will you vote for her when you cast your votes later in the week?

You ask me about my personal vote in November? Obama has two months. I won't vote for McCain. But he has to get me there and I haven't connected with him. Experience speaks to me. I ask everybody all the time, I said, would you take us to heal us? Would you take somebody straight out of Harvard, even if they had the education, and put them as a CEO in the company?

MALVEAUX: Tell me the kind of connection you felt with Hillary Clinton.

PRICE-MILLS: I see in Hillary, I saw in Hillary what my potential future could be. I saw more than just dreams. I saw things that could be reality.

In her eyes and in her words, I could envision the reality of knowing that we can actually have green jobs instead of talks. That we could have the image that we once have of a United States that was respected and that went out and did the jobs that we're supposed to do on the global level. I saw the country that we strived to be and wanted to be and she could have made it happen.

I've never not voted. I am one of the strongest Democrats I know. I call up all my family and say, Carl, you need to get out the house, I don't care how much rain is pouring down. I don't what's going on in your schedule, you need to vote.

For the first time I'm faced with not being a person who calls them and says go vote. They may have to call me and tell me and remind me of how hard and how long we strived to get to the right to vote, the right to be here.

Experience counts. I don't care what anybody told you. And his resume is just -

MALVEAUX: Okay. Anne Price-Mills, thank you so much for joining us here on CNN. I appreciate it.

Obviously a very emotional delegate who says that she doesn't even know at this point whether or not she's going to vote in November; a very difficult decision for her - Wolf, Anderson.

COOPER: Suzanne, on Thursday night after Barack Obama's speech, let's try to find that delegate and see if she has changed her mind after hearing from Barack Obama and from Joe Biden.