Who do the voters think is better qualified to deal with Russia?  McCain, by better than 2 to 1.

Now Mccain is being accused of crude populism, with similar comments, like this one: "Senator Obama says he wants energy independence, but he's opposed to do drilling at home."

In return, Obama mocks McCain: "He points down at his feet, and I don't know if he knows something I don't. 'Drill here, Drill now."'

Gas prices have risen sharply under a Republican President. This should be killing the Republican candidate.

So who do voters think would better handle energy prices? It’s a close call. One poll shows McCain slightly ahead, and another shows Obama leading by a narrow margin. 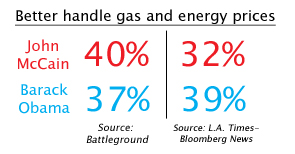 The playbook didn’t quite work for Clinton in the primaries.

Will it work for McCain in the general election? This time, it’s a larger and more conservative electorate, but the forces for change are more powerful against a Republican than they were against Hillary Clinton.