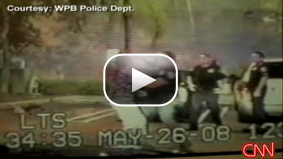 Louis Schwartz and Kurt Graham respond to a report of a man wearing a ski-mask inside a pharmacy.

According to its web site, the West Palm Beach Police Department has 271 sworn officers in its ranks.

It also has an Internal Affairs Unit that probes allegations of misconduct.

This week, Internal Affairs has a new case to investigate – one that was captured on tape. The video, which was recorded by a patrol car dash-cam, was shot on May 26th.

The officers, Louis Schwartz and Kurt Graham, were responding to a report of a man wearing a ski-mask inside a pharmacy. When they arrived, police said the suspect, Pablo Gilberto Valenzuela, used pepper spray on Schwartz. He also allegedly bit one officer and spit on another. The 42-year-old suspect was arrested near the scene. The dash-cam picks up what happened next.

If you watch the video, it clearly shows Valenzuela being handcuffed on the ground. Seconds later, the officers are seen kicking and punching him in the face, Valenzuela’s body jerks upwards from the force.

There is more. As Valenzuela is being led away to a police car, a third officer, Jason Zangara, can be seen repeatedly punching the cuffed suspect in the face. He then falls to the ground. Valenzuela was charged with robbery, battery and resisting arrest.

Officer Graham resigned from the force last month. Officers Schwartz and Zangara were placed on administrative leave. The incident is under investigation.

Watch the video and judge for yourself.