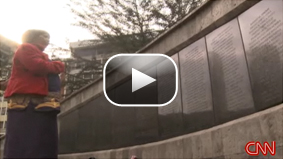 It was the scars on his face and hands that I noticed first.

Douglas is blind - but that is not what struck me.

When I shook Douglas Sidialo's hand, it was lined with the memories of the event. Webbed with scars.

He tried to shield himself from the massive blast 10 years ago.

It is a decade since al Qaeda terrorists packed a truck with explosives and detonated it outside the U.S. embassy in downtown Nairobi.

Almost simultaneously, the US embassy in Tanzania was targeted.

In Nairobi the attack had devastating effects. Though the United States was the target, it was ordinary Kenyans who felt the full brunt.

Over 200 people were killed and 5,000 injured, the majority Kenyans going about their daily lives. And I was struck by the visceral anger many of them feel a decade later.

Douglas lost his sight and his livelihood as a marketing professional. He, like many others I spoke to on the 10th anniversary of the attack, feels that the U.S. government should compensate them for their shattered lives.

The U.S. is in a tight spot. Meeting with the U.S. ambassador, I did sense genuine compassion. The U.S. congress allocated over $40 million to rebuild Nairobi and help victims - but they draw the line at direct compensation.

Apart from anything else, it could bring from demands from non-American terror victims.

Many victims also feel let down by the Kenyan government. Over the past few years the government has done little to help the survivors committee.

And at the commemoration, there was more anger directed at previous Kenyan governments than at the U.S..

The victims feel that they should get direct compensation - and for them the easiest place to look is to the U.S. - even though the U.S. was a victim of the attack.

U.S. law does allows victims to sue nations that sponsor terror, as has been done to the Libyan government with the Lockerbie disaster in 1988.

But al Qaeda is an amorphous terror group with no one state sponsor.

"They can't expect that I, a simple victim can go to that length to compel al Qaeda, and those behind the bombing, to compensate us," Douglas told me in exasperation.

For all the obvious bitterness at the hand that the survivors have been cruelly dealt, I was amazed at the atmosphere at the anniversary.

It was as much a celebration of their individual triumphs as it was commemoration of their collective loss. And as I looked over at the hundreds of families at the memorial site today, I couldn't help but be struck by it. Some hobbled in on crutches, while others were led in by their sighted family.

But one survivor did grab the microphone to say: "We are not victims, we are survivors!"

They still bear the scars - but for many, they are badges of honor that they proudly display as if to say: "They couldn't kill my spirit."