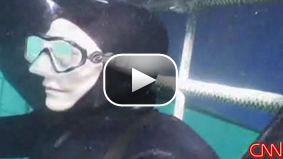 Watch Anderson Cooper in the water with great white sharks off the coast of South Africa.

It is an odd sensation. Lowering yourself into water teeming with great white sharks. There is a cage between you and the sharks, but its open on the top, and when the first shark emerges from the shadows, moving full speed toward you, its giant mouth open, revealing rows of razor sharp teeth, the cage is little comfort.

I spent last week off the coast of Cape Town, South Africa for Planet in Peril: Battle Lines. The second installment of our documentary series that will air this December. Sharks are hated creatures, and because of that there is little outcry at their destruction. Each year, as many as a hundred million sharks are killed, many slaughtered for their fins which are used to make shark fin soup, a delicacy in Asia.

Great white sharks however are a top predator in the sea, and if they disappear, the entire underwater ecosystem will be affected.

What’s really interesting is that scientists don’t know much about great white sharks. They’ve never been seen mating, or giving birth. We get glimpses of great whites, but they are difficult to track, and even harder to observe underwater. That’s why we went to the frigid waters off Cape Town. Each year, around this time, great whites gather, eating seals which are plentiful in South Africa’s water.
[cnn-photo-caption image=http://i2.cdn.turner.com/cnn/2008/images/08/05/art.ac.jaws.jpg]
We wanted to get as close as possible to the great whites, and we teamed up with a shark expert named Mike Rutzen. He runs a cage diving operation for tourists, and is one of the few people in the world who actually free dives with the great whites - without a protective cage. He argues that only by free diving can you really see that great whites are not the man-eating killers they are made out to be in movies. They are dangerous, no doubt about it, but Rutzen believes there is much we can learn about the sharks by observing them up close.

I’ve always been very fearful of sharks, but I must admit, after diving multiple times with them last week, I have a much greater understanding of them, and appreciation for their role in the sea. They are magnificent animals. I’m not saying they still don’t make my heart race faster when I see them, but I no longer think they are simple man-eaters, out to get bathers and surfers.

The chances of getting attacked by a shark are extremely small. More people are hurt by dogs each year, and car accidents, and lightning. I kept reminding myself of that when I was underwater with them last week. I clung on to that, almost as tightly as to the bars of the cage I was diving in.