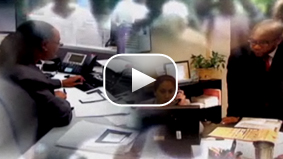 CNN's Stephanie Elam examines the impact of a recession on blacks in the U.S.

When I set out to do a story on the effect recessions have on black Americans, I was prepared for some dire statistics. I wasn’t pleasantly surprised. Here’s my biggest takeaway: as the unemployment rate increases for the population overall in a recession, the increase among blacks is roughly double. And when a recession hits, blacks take longer to regain employment after the economy recovers.

As if that isn’t bad enough, it was what I learned about younger black Americans that really left an impact. According to John Schmitt of the Center for Economic and Policy Research, the unemployment rate for black teens is about twice that of white teens. In the recession that lasted from 1980 into 1982 – the black teen unemployment rate skyrocketed to 50 percent.

If young people can’t get a job, their future prospects are greatly limited. As Schmitt put it, people in this situation can languish in unemployment or low-wage jobs that don’t help build a foundation for future wage increases or better opportunities. The teenage unemployment rate for blacks is a huge indicator of the future.

No doubt there are several reasons for the disparity. For one thing, while the number of college-educated blacks continues to grow there is still a larger group that has a high school diploma or less. That’s the demographic that tends to suffer the most during a recession. Another problem is a decline in manufacturing jobs. In fact, most of the black American middle-class built its wealth through manufacturing and union jobs held in the fifties, sixties and seventies. At the end of the seventies, a quarter of black workers had manufacturing jobs. Today, that statistic is down to 10 percent.

A lot of the headlines at CNN are about Issue #1 – the economy – but it seems for many blacks in America the headline is even more specific: Jobs Wanted.