The reality of autism 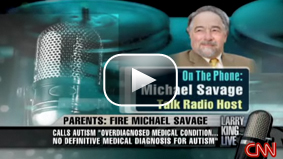 Editor’s note: Dr. Charles Sophy is responding to recent comments by radio talk show host Michael Savage. Savage said this about autism: “Now the illness du jour is autism. You know what autism is? I'll tell you what autism is in 99 percent of the cases. It's a brat who hasn't been told to cut the act out.” WATCH SAVAGE ON LARRY KING LIVE

Uneducated opinions such as Mr. Savage's are truly reprehensible. There is NOTHING fraudulent about Autism! It is a real medical condition. It is like saying there's no such thing as a broken leg.
It's not that there are necessarily more autistic people in the world now, but parents and medical experts in the U.S. today are more aware of and more apt to explore "unusual" behaviors or developmental delays in babies and toddlers.

Moreover, there is no medicine for autism. So overmedicating or over prescribing for autism is not a possibility. Many people with autism, however, do have co-morbid disorders i.e. depression, anxiety, mood disorders etc. which sometimes do require and respond very well to medication.

Most importantly, early intervention for autism is key. Any developmental delays or unusual behaviors should be explored early on by an expert. In this way, a mild developmental delay (not on the autistic spectrum) can be helped along, and a true case of autism will have the best chance for an optimum outcome.