If the standard, as Times Op-Editor wrote in his memo, is "new information," McCain's op-ed clearly meets it: the new information is McCain's inability to adjust his position now that the Iraqi government has announced what must be considered a major change of policy.

For example, we have this:

[Obama] makes it sound as if Prime Minister Maliki has endorsed the Obama timetable, when all he has said is that he would like a plan for the eventual withdrawal of U.S. troops at some unspecified point in the future.

But, of course, that's wrong. Maliki endorsed a 16-month timetable. And now the Iraqi government is saying that American troops should be out by 2010. (Actually, I see Shipley's point here: new information would be McCain's reaction to the Iraqis setting an 2010 end date.)

The Shot: Car into coffee shop 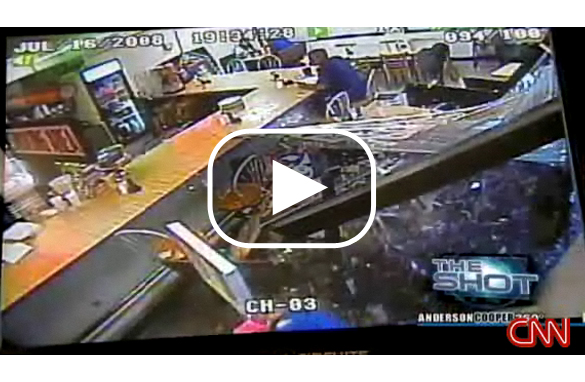 A car slams into a diner and right into a customer's table.

The Disco Biscuits and your vote

Music festivals are always an interesting mix of people, sounds, and food. This past weekend at Camp Bisco in Mariaville, New York, was no different.

With artists like The Disco Biscuits, DJ Shadow & Cut Chemist, Bassnectar and Snoop Dogg taking the main stage, there was ample opportunity to dance and mingle with new friends while soaking up the hot sun. But just off the main stage, was an opportunity to do something that will last long past the three days of nonstop music: Voter Registration.

Many concerts and music festivals have voter registration tents. But at Camp Bisco the organizers of HeadCount made the most of their opportunity, making their tent the first you pass while leaving the main stage area. HeadCount says it is a non-partisan, not-for-profit organization that was created in 2004 by a group of artists, music professionals and fans who wanted the music scene represented at the polls. They have traveled around to various concerts and festivals over the past four years and are seeing record numbers this year.

While Camp Bisco isn’t the biggest festival they’ve been at, HeadCount co-chair Andy Bernstein told me that percentage wise, this was the most successful mid-size festival this year with 366 of the roughly 7500 in attendance registering. The music fans at this particular festival were mostly fans of the event organizers, The Disco Biscuits, END_OF_DOCUMENT_TOKEN_TO_BE_REPLACED

Watch out Southern Texas...Tropical Storm Dolly...soon to be come Hurricane Dolly is headed toward Texas. Dolly will be the first Atlantic hurricane to hit the USA this year. The National Hurricane Center said Dolly will hit the southern Texas coast early Wednesday as a Category 1 hurricane, the lowest of five hurricane classifications, with maximum winds of 95 mph. So get out your rain boots because "This is going to be a horrific rainmaker," said Dennis Feltgen, a spokesman for the Miami-based center. "This could be a very significant … flooding event." AND we are CNN so we are flooding the zone..no pun in tended...Gary "hurricane reporter" Tuchman will be in South Padre Island tonight, Sean Callebs and Miles O'Brien will be in Corpus Christi....

Candy Crowley continues tracking Obama...Fresh from his visit to Iraq, where he discussed his plans to draw U.S. combat troops out of the country, Barack Obama will arrive this morning in Jordan, he will have a private meeting with King Abdullah and then join his travelling companions — Sens. Jack Reed, D-R.I., and Chuck Hagel, R-Neb. for a small dinner with the king, Queen Rania, and several top Jordanian officials. He leaves then heads to Israel...