One mystery is over, another just beginning.

The worst fears for the friends and family of Nancy Cooper were realized yesterday.

Three days after the mother of two disappeared, her body was discovered near her home.

She was 34-years-old. And she was the victim of a homicide.

Who killed Nancy Cooper and why?

Authorities are determined to answer both questions. They are conducting interviews, canvassing the neighborhood, and looking for forensic evidence.

Police have also obtained a search warrant for the Cooper family's home and cars. And they want to talk to Nancy's husband, Brad Cooper.

According to Brad, his wife went out jogging Saturday morning and never returned. Police say he is cooperating in the investigation, and would not confirm or deny reports that he bought bleach the day she vanished.

On a Facebook page dedicated now to the memory of Nancy Cooper, one post says the rumors and guessing swirling around the crime should end. "I hope that people can withhold any judgment or speculation about who they think may be responsible until all the facts are in," it reads. "Such comments are even doubly hurtful to those loved ones already grieving." 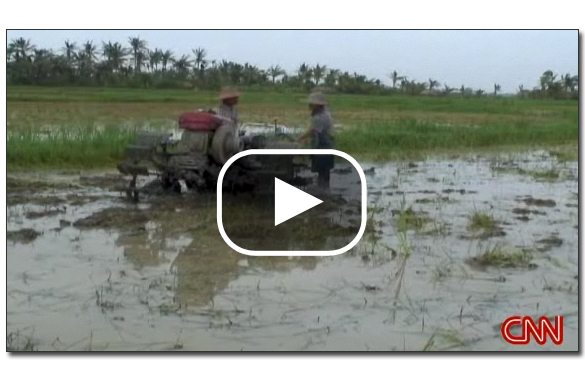 CNN's Betty Nguyen reports on Myanmar farmers struggling to survive after cyclone Nargis. Even after the disaster, it's a hard road ahead as they try to salvage their crops.

The Price of Pets

OK so you've cut the extra trips, stopped buying new clothes, trimmed the food budget, but still the family budget's in the red. What next, the family dog? Sadly, for some, the answer is yes.

We're starting to hear stories about people being forced by the rough economy to give up pets. The Humane Society even has a term for it- "pets in foreclosure." Numbers are hard to find, but the early reports from animal shelters and rescue leagues look bad.

There is help out there, and as we investigate just how serious a problem this is we'll be sure to get the experts' advice on how to keep the cost of owning a pet down. But for now, if you or anyone you know is facing this kind of decision, we'd love to hear about it.

Morning Buzz: Is America ready for a black president?

Last night on Larry King - Senator Barack Obama said that if he's elected president in November, he will seek input from military commanders on the Iraq war and the fighting in Afghanistan. "But ultimately, the buck stops with me...I am absolutely convinced that strategically it is time for this [Iraq] war to end," Obama said, adding he believes the United States can withdraw combat troops from Iraq within 16 months while leaving "a residual force to engage in counter terrorism activities" and protect diplomats. Obama also did some more finger pointing - saying the Afghanistan and Iraq conflicts have "worsened" because the Bush administration has emphasized war tactics more than an overall strategy. Hmmmmm, I wonder if the President will respond...we will keep you posted...