Jesse Jackson and the Ethics of Apologies

Editor's Note: Dr Weinstein discusses ethics every Friday on American Morning. Some of the material in this article appeared originally on BusinessWeek.com

What are the ethics of giving and accepting an apology? I’ll answer this question, first with respect to the Jesse Jackson story, and then more broadly as the issues applies to all of us.

In a written statement last week, Jackson said, “For any harm or hurt that this hot mic conversation may have caused, I apologize.” This is a classic non-apology apology, since it is a thinly attempt to blame others for the problem. The phrase “hot mic conversation” implies that Fox News was wrong to broadcast Jackson’s remarks, and “any harm or hurt [my remarks] may have caused” suggests that the culprit is not Jackson himself but all of the hypersensitive people out there who feel offended.

What Jackson should have said was, “I take full responsibility for my inappropriate comments, and I am deeply sorry that I said them.”

END_OF_DOCUMENT_TOKEN_TO_BE_REPLACED 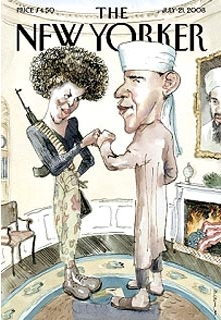 Barack Obama's campaign is condemning it....calling it “tasteless and offensive”...the "it" is a New Yorker magazine cover that depicts Obama in a turban, fist-bumping his gun-slinging wife. Plus, the cartoon shows an American flag burns in their fireplace. The New Yorker says it's satire. Is it? Or does it cross the line? We will definitely be talking about this tonight....

Jessica Yellin will be LIVE for us tonight from the NAACP convention where both Barack Obama and John McCain vie for African-American votes this week...a stop along the campaign trail with potential opportunities and pitfalls for both candidates. Obama will speak tonight!! On the surface, the convention should be a love fest between the African-American attendees and the first African American with a real chance of being elected president. BUT "racial disparity will remain an issue in America, regardless of whether Barack Obama is elected as the nation's first black president..." the chairman of the NAACP told the organization's national convention Sunday night.

Barack Obama is making headlines in the NY TIMES today...he has an op-ed titled: My Plan for Iraq

Here is an excerpt: THE call by Prime Minister Nuri Kamal al-Maliki for a timetable for the removal of American troops from Iraq presents an enormous opportunity. We should seize this moment to begin the phased redeployment of combat troops that I have long advocated, and that is needed for long-term success in Iraq and the security interests of the United States....

On another front...Obama is also calling for the Administration to step up or "re-up" efforts in Afghanistan – no longer the forgotten war....