What is the Iran connection?

It looks like gas could hit $5 a gallon shortly and perhaps even $6 a gallon by the end of the year. This is a huge problem for drivers, the auto industry and airlines, of course. And it could lead to significant changes in the way we live.

It also might have some grab in the presidential campaign: how much is the rumbling over a possible strike against Iran driving up prices? There was a lot of speculation last week about that. Then the price of oil went down yesterday because nothing happened over the weekend regarding Iran.

With Bush and the Israelis talking quietly about hitting Iran before Bush leaves office, and McCain and Obama in such different positions about how to handle Iran, it's worth exploring higher energy prices. What's behind them: is there really a conspiracy among speculators; what is the Iran connection? END_OF_DOCUMENT_TOKEN_TO_BE_REPLACED 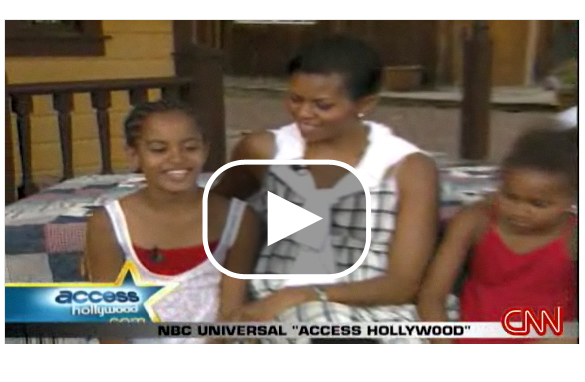 Days after Barack Obama granted the first television interview with his entire family, the presumptive Democratic presidential nominee said he regrets thrusting his two young daughters in the media spotlight.

"I think that we got carried away in the moment," Obama told NBC Wednesday morning. "We were having a birthday party and everybody was laughing, and suddenly this thing cropped up, and I didn't catch it quickly enough and I was surprised by the attention it got."

Jailed polygamist sect leader Warren Jeffs was taken to a hospital in Las Vegas on Tuesday, but police would not say why.

Las Vegas police Officer Jose Montoya said Jeffs was taken from an Arizona jail to the Sunrise Hospital and Medical Center in Las Vegas on Tuesday.

"I can't tell you why he was brought here or what his condition is," he said.

He referred questions to the Mohave County Sheriff's Office in Arizona. A call to the sheriff's spokeswoman was not immediately returned.

The jail, in Kingman, Arizona, is about 100 miles from the medical center.

Jeffs, 52, is the leader of the estimated 10,000-member Fundamentalist Church of Jesus Christ of Latter-day Saints.

I was struck by the mass e-mailing David Plouffe did Monday offering tickets to the Obama acceptance address in Bronco stadium - and attaching to it a request for a $5 donation which gave you essentially a raffle ticket for the speech. How they are using the Internet and marrying it to community organizing from his past is a thing to behold - likely to change our politics for a long time to come. Essentially McCain is moving toward running a much more top down campaign, while Obama is gaining great traction from his grassroots up approach:
END_OF_DOCUMENT_TOKEN_TO_BE_REPLACED

Paying too much for gas... Here's who's clogging the nozzle

Reeling from GOP attacks on her lack of leadership on energy issues, House Speaker Nancy Pelosi, D-Calif., is ramping up her party's attack on so-called oil speculators.

It’s the same song, different verse, for a Congress with historically low approval ratings now in the single digits. The Republicans' newly aggressive push for more drilling may be late in the game, but it represents real solutions.

For more than a decade, Pelosi and the Democrats have opposed reasonable efforts to find more oil here at home. She and Senate Majority Leader Harry Reid (D-Nev.) are refusing to support—or even allow a clean vote on drilling in ANWR (Arctic National Wildlife Refuge).

END_OF_DOCUMENT_TOKEN_TO_BE_REPLACED

The question clearly caught the candidate by surprise.

John McCain and his wife Cindy were making an unannounced stop at a popular sandwich shop on Tuesday in Pittsburgh. As they sat the counter waiting for their orders, McCain held a quick media availability with the local reporters and the traveling national media pool.

The main questions focused on McCain’s reaction to Prime Minister Maliki’s comments about the US withdrawing from Iraq, McCain's campaigning in the key battleground state, and a possible extension of the emergency loan program for investment banks. McCain’s press secretary tried to end the questioning after the first several, but McCain wanted to take a few more.

The one he didn’t see coming was posed by an AP reporter, asking about a report of a large increase in exports of items like cigarettes to Iran during the Bush administration. McCain’s eyebrows arched as the reporter said cigarettes.
END_OF_DOCUMENT_TOKEN_TO_BE_REPLACED