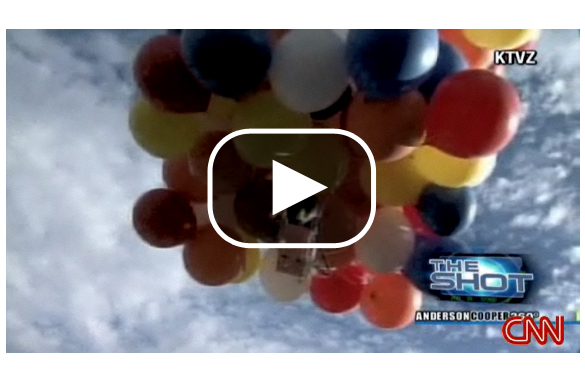 On Saturday, Kent Couch flew from Oregon to Idaho by strapping helium balloons to his lawn chair. The trip took nine hours and lowered himself by shooting the balloons with a BB gun.

For what’s in the program take a look at tonight’s Evening Buzz.

Be sure to check out Anderson on our live web camera from the 360° studio. We’ll turn the camera on at 945p ET and turn it off at 11p ET.
LINK TO THE BLOG CAMERA

We’ll start posting comments to this blog at 10p ET and stop at 11p ET.

Don’t forget the other hostages

The last thing any Colombia watchers were expecting was a hostage rescue.

The Colombian military had bungled so-called "blood and fire" missions in the past. As soon as the FARC rebels realized the army was coming in on foot or in choppers they would either kill their captives or ultimately the hostages would end up dying in the ensuing crossfire.

The jungle is most definitely the guerrillas’ home turf. I flew over the region where many of these hostages were being held in November. No roads, the only "highways" were rivers. One of my companions described it as looking out over a “sea of broccoli”.

From the air it was easy to understand how easy it must have been for the insurgents to conceal their hostages for years at a time.

The plan sounds so simple it seems ridiculous but it worked. The army took a page straight out of the rebels’ play book. They disguised themselves as a humanitarian aid mission, sent a number of bogus orders to rebel commanders and simply showed up and collected the FARC’s prize hostages – no questions asked, no shots fired.

END_OF_DOCUMENT_TOKEN_TO_BE_REPLACED

[cnn-photo-caption image=http://i2.cdn.turner.com/cnn/2008/US/07/06/wildfires/art.backfire.ap.jpg caption="Firefighter Lou Sturtevant walks back up to the road after starting a backfire Friday in Big Sur, California."]Maureen Miller
360° Writer

What would you do if a wildfire was getting dangerously close to your home? In California, two brothers decided to fight fire with fire.  They set a controlled burn known as a "backfire" to save their 55-acre compound in Big Sur. It worked. But it didn't go over well with the authorities (AKA: the California Dept. of Forestry and Fire protection & sheriff's deputies). One brother was arrested. The other figures he's a wanted man. He's hoping he doesn't run into the authorities. Tonight, you'll hear from Micah & Ross Curtis. Do you think what they did is wrong? Or are they heroes for saving their property and possibly a nearby village?

END_OF_DOCUMENT_TOKEN_TO_BE_REPLACED

The Vision Thing, all over again

It's the economy, smartypants.

John McCain and Barack Obama talked today about how to save an economy plagued by six straight months of job losses, a bear market, rampant foreclosures, teetering credit card debt, a sunken dollar and falling consumer confidence. Oh, and three quarters of Americans think we're in a recession, says a CNN/Opinion Research Corporation Poll out today.

So... did you catch their econ plans, carried live on cable nets? What do you think?

Thing is, both candidates have been talking about solutions for a couple months. But it's not clear that either has gotten much traction among the public. END_OF_DOCUMENT_TOKEN_TO_BE_REPLACED

Farmers of the "400 Pueblos" organization demonstrate wearing just a photo of Mexican Senator Dante Delgado Ranauro, who is also a former Veracruz state governor, that reads in Spanish "Corrupt and Oppressive" in Mexico City, Friday. The farmers have repeatedly staged these half-naked protests to demand that land be returned to them after it was allegedly seized by the former ruling Institutional Revolutionary Party, or PRI, between 1992 and 1998. 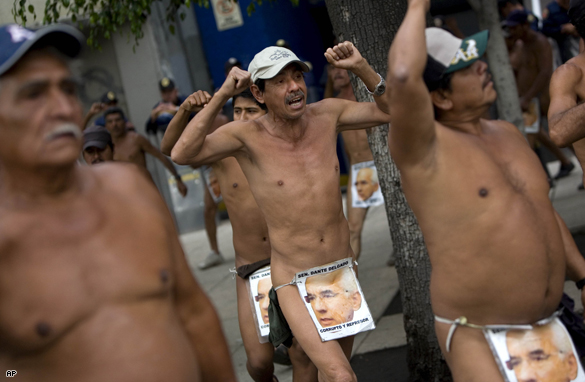 G8: Let the other kids play

The world’s top leaders are in Toyako, Japan today for the second day of the G8 summit. This year’s agenda includes major issues such as climate change, soaring oil prices, and rising food costs. The forum was established as a way for the world’s economic powers to discuss pressing matters and how they can find a solution to these problems, but is the G8 really a fair representation of the world’s major players?

The group consists of Canada, France, Germany, Italy, Japan, Russia, the United Kingdom, and the United States—all countries that held significant international influence when they all first met in 1976. However, in 2008, the game is changing and developing countries like Brazil, China, and India are surpassing these “leading industrial nations” in economic strength, population, and influence. Some say it’s only fair that these countries be invited into the discussion. END_OF_DOCUMENT_TOKEN_TO_BE_REPLACED

On our last night in Taiwan, we visited a restaurant that proudly serves Shark Fin Soup. A couple from Japan came specifically because they had seen an ad for it in a popular Japanese magazine. It was a Thursday night and the restaurant was full—every table ordered it. What was once only consumed on special occasions for wealthy people has become so commonplace that we saw shark fin products in a gas station mini-mart.

It seems the best way to save the world's shark population will be to educate people about how shark fin soup is made. I know that I was totally shocked when I learned of the process and what happens to so many sharks as a result of our desire to consume this insignificant soup. Sure, it's tasty, but so is a twinkee. 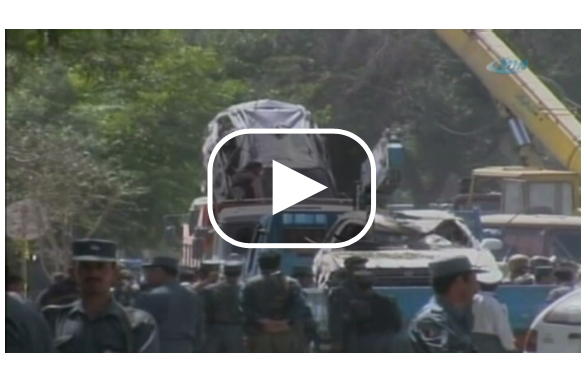 At least 40 people were killed and 141 injured from a deadly blast this morning in Kabul, Afghanistan. Despite hallmarks of a Taliban attack, the group is denying responsibilty for the bombing. At this point, there is no clear evidence which group carried it out. CNN's Nic Robertson reports.