Clinton said he is prepared to campaign for Obama after the hard-fought primary campaign between Obama and Hillary Clinton, the Obama campaign said...

Obama "had a terrific conversation with President Clinton and is honored to have his support in this campaign," said campaign spokesman Bill Burton.

Detroit Congresswoman Carolyn Cheeks Kilpatrick has never lost an election. In fact, she's never received less than 78% of the vote. But that was before her son, Detroit Mayor Kwame Kilpatrick, was indicted for perjury; for lying about an alleged sexual affair with his chief of staff, and about whether he fired a police officer in an act of political retaliation. The evidence against him includes some very graphic text messages.

In Democratic Detroit, the primary is the only contest that really counts. Last time up, Rep. Kilpatrick coasted: this time she has two opponents, one of whom has already produced a savage ad that uses an old defense of her son against her. Despite the filial baggage, Kilpatrick is still expected to win the August primary, but as she herself acknowledged in an interview with CSPAN this weekend, her son's troubles haven't helped.

A bit of good news for Congresswoman Kilpatrick, her son's trial isn't set to start until late September, well after the primary. The Mayor, for the record, maintains his innocence.

Here is the ‘Beat 360°’ pic of the day: Sen. John McCain is asked a question by Piper Macke, right, during an interview with McCain in Cincinnati, Ohio. Spencer Macke, center, earned the admiration of Sen. John McCain by selling $4,000 worth of yellow ribbons to benefit troops abroad, so the first-grader and his younger sister were rewarded Thursday by getting to ask the Republican presidential contender a series of five questions. 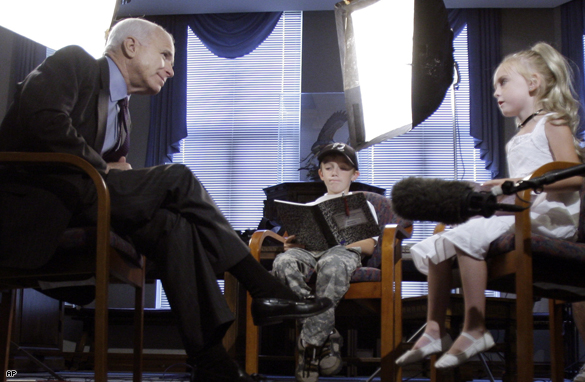 This just in...former President Bill Clinton and Barack Obama plan to FINALLY talk TODAY and discuss Clinton's role in the election...what will Bill's role be? The two have been playing phone tag, and there was lots of speculation when Bill did NOT show up at Friday's "unity" event in New Hampshire....Candy Crowley will hopefully have some insight...

In other political news...Retired U.S. Gen. Wesley Clark, a supporter of Democratic presidential candidate Barack Obama, took a BIG swipe at John McCain, yesterday. Clark questioned McCain's military experience and questioned whether it qualified him to be commander-in-chief. Getting "shot down in plane" doesn't make McCain qualified, Clark said....OUCH!!! The McCain campaign called for Obama to condemn the remarks. Dana Bash covers the republican riff for us today...

Will the United States enter into a third war during Bush's reign? Well, according to Seymour Hersh - the Bush administration has launched a "significant escalation" of covert operations in Iran, sending U.S. commandos to spy on the country's nuclear facilities and undermine the Islamic republic's government. White House, CIA and State Department officials declined comment on Hersh's report, which appears in this week's issue of The New Yorker. Hersh told CNN's "Late Edition with Wolf Blitzer" that Congress has authorized up to $400 million to fund the secret campaign, which involves U.S. special operations troops and Iranian dissidents....we will bring you the latest... END_OF_DOCUMENT_TOKEN_TO_BE_REPLACED