When I was a high school freshman my friend Jeff Livergood was running for student council and he asked me to be his campaign manager. I had no interest in student government, but loved the idea of a good contest, and he was a pal, so I signed on. I’m sure he must have regretted it. In the week’s leading up to voting day I made maybe two, or three posters at most. I didn’t hand out buttons or stickers. My entire role in our campaign’s “get out the vote” effort consisted of responding to the often asked question: “Hey, aren’t you Jeff’s campaign manager?” “Oh, uh, yeah. Vote for him, ok?”

But even if Jeff was considering pushing me out in favor of a more aggressive team leader, I was at ease. I knew then, just as surely as I know now, that elections are not decided on issues, experience, qualifications, or campaign machinery. All those things matter, to be sure, but in the end what matters most is a general sense among voters about whether this candidate is the kind of candidate they like. That’s it.

It’s true of presidential races, too. That’s why Democrats are working so hard to point out the political similarities between George Bush and John McCain, and to minimize the differences. The Dems know that President Bush is highly unpopular right now and if they can convince enough voters that McCain is just like him, it will be a done deal: McCain will be slaughtered at the polls this fall, and Barack Obama’s beaming smile and message of hope will roar into the White House.

So how McSame is McCain to Bush? END_OF_DOCUMENT_TOKEN_TO_BE_REPLACED

If you're a dedicated Democrat - or perhaps even one of those fed-up Republicans we've heard about - there's a good chance you're pretty stoked right about now. After a grueling but thrilling primary contest, we at last have decided on a history-making, barrier-breaking Democratic presidential candidate. You're excited! You're inspired! You're ready to hit rural Ohio with enough campaign literature to choke a wavering independent!

But why do you keep hearing all these stories about grumpy old ladies still hung up on Hillary Clinton, the ones who're threatening to make a scene at the Democratic convention in Denver, or vote for John McCain in November?

To be fair, it's not just women. There are plenty of Clinton supporters of every demographic description who are still ticked. But yes, it's true that the Clinton base skewed female, and that women over 30 are the most vocal of the malcontents. Some of them are calling themselves "PUMAs" (as in "Party Unity My Ass"), an acronym that makes them sound, appropriately enough, like cougars in a very bad mood. Who are these women, and why are they such buzzkills?
END_OF_DOCUMENT_TOKEN_TO_BE_REPLACED

Honestly, sometimes this job is so much fun because really you can't make this stuff up.

This Friday, Barack Obama and Hillary Clinton will appear together at a "Unite for Change" rally in Unity, New Hampshire where the final vote tally in the primary was 107 to 107.

Personally, I would have preferred Battleground, Washington or Defiance, Missouri but I think those spots might have been off-message...which is - all together now -

So, Unity, New Hampshire for a Unite for Change rally.

Here is the ‘Beat 360°’ pic of the day: Looks like the dog day's of summer might be here sooner than we think! Here we see Lola the Chihuahua participating in Lynn University's First Annual "Take Your Dog To Work Day," last Friday in Boca Raton, Fla. 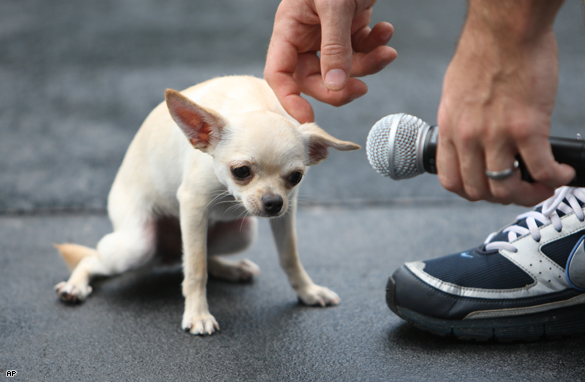 "What's the matter Lola, cat got your tongue?"

Starting today, when you win ‘Beat 360°’ not only do you get on-air prime-time name recognition (complete with bragging rights over all your friends, family, and jealous competitors), but you get a “I Won the Beat 360° Challenge” T-shirt!

They thought they'd be safe...

All roads to Gulfport, IL lead to nowhere. They all dead-end into Mississippi flood waters. The closest we could get to the inundated Village using roads in Illinois was a police roadblock that is SEVEN MILES from town. That might tell you how close this river town of about 200 was to disaster when the flood waters started to rise.

But people lived here comforted by a levee system that the government said would protect them from a 100 year flood. No one was required to have federal flood insurance. Only 28 property owners had it. Some now say they were misled about the risks they were taking and that the chance of catastrophic flooding was miscalculated.

END_OF_DOCUMENT_TOKEN_TO_BE_REPLACED

Morning Buzz: It is NOW a waiting game...

[cnn-photo-caption image=http://i.cdn.turner.com/cnn/2008/images/06/23/art.memorial.flood.jpg caption="Flood waters of the Mississippi River inch closer to the water marker from the 1993 flood, Sunday."]

The battle against the swollen Mississippi River has shifted. For the last week it was fought with sandbags...Now the weapon is patience!!! It is NOW a waiting game, while folks along the river just wait to see if waters will crest...

But the biggest impact we may feel across the country from the Midwest floods are FOOD PRICES...The floods engulfed an estimated 2 million or more acres of corn and soybean fields in Iowa, Indiana, Illinois and other key growing states, sending world grain prices skyward on fears of a substantially smaller corn crop....

Gary Tuchman will have the latest on the floods, but David Mattingly is Keeping local officials and FEMA honest tonight...WHY? Because local officials assured the 750 townspeople in Gulfport, ill in 1999 that the levee near their town was sturdy enough to withstand a historic flood, FEMA Even agreed. SOOO, some relieved homeowners DROPPED their flood insurance…but on Tuesday the levee burst…most residents are feeling betrayed...David will that that story tonight...

Candy Crowley will bring us up to speed on the political front...