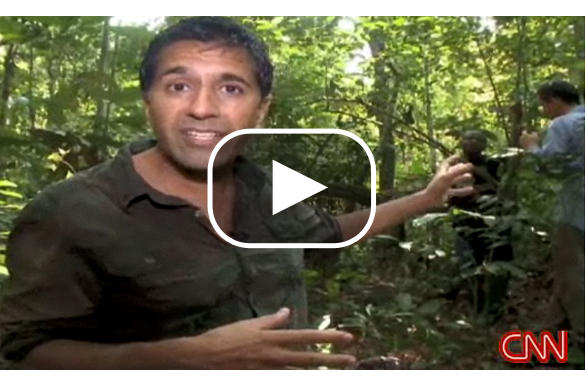 Editor's Note: This blog (and vlog) was brought to you from the southern jungles of Cameroon.

Today I did something I am unlikely to ever do again in my life. For eight hours, I trekked through a jungle in southern Cameroon. Now, I have been on hikes before, but this was unlike anything I ever experienced.

As soon as we entered the jungle with a local hunter named Dede Donddong, we were immersed in the feel of the jungle. You could immediately hear the sound of Hornbills and an African Gray Parrot in the distance. It was loud and melodious.

You could also feel the intense heat and humidity uniquely experienced in a jungle – within seconds, we were drenched. You could smell the centuries of foliage mixed with the live scent of animals and everything around us was green, almost unimaginably thick.

I didn’t know how we would even make our way through the jungle, as there wasn’t a path that I could immediately see. Eddie smiled and wielded a machete. He started a path and began our 8 hour journey.

For us, we were in pursuit of a story for Planet in Peril: Battle Lines, looking at the bushmeat trade and the reliance of locals on these animals for protein. For Dede, it was a mandatory trip to find some sort of bush animal, so that his family might eat that night.

As we left, his three kids, two parents, his wife, and three neighbors bid him farewell and good luck. They were all hoping he would come home with something, really anything. But, his kids told us their favorite bushmeat was porcupine. Yes, porcupine. Along with snakes, rodents, primates, antelope and many other animals, they are collectively referred to as “bushmeat”.

We learned about the concerns of a bushmeat crisis in western and central Africa. According to some estimates, 4.5 million tons of bushmeat was extracted from the Congo basin last year, putting a few animals on the endangered list, and a few others on the protected status list.

In fact, the ape population in 96% of protected areas is declining. Within the next 10-50 years, the apes face extinction. Excessive hunting, along with deforestation is a large part of the problem.

There is no question Dede alone is not to blame. And, don’t forget, his family is dependent on his ability to hunt and bring bushmeat back to the village. Buying food from larger villages is simply not an option as the towns are too far away and the food is too expensive.

What we saw today was a part of the daily life and culture for so many living in the jungle. Still, the bushmeat crisis appears to be real, with no evidence of slowing down. This is one reality of the food crisis in central Africa.

Oh, and by the way, Dede brought home a porcupine today and his kids were happy.

You can read about this and other Planet in Peril stories here.