Looking at 25% of the mountain gorilla population

Today I’m covered in mud, wet and frankly….exhausted. I just trekked for over 3 hours up a mountain to see the critically endangered mountain gorillas. It was special sight – the gorillas we saw are known as a “research group” – they’ve never been seen by tourists, and very rarely by anyone but the scientists who study them.

Our journey started with an hour-long drive up an endlessly rutted and muddy road. At one point we got stuck and everyone had to get out and help push…except me! (I was filming – call it the benefits of being a photographer!) We finally broke free, drove 15 more minutes, then the hard part began….

The trek starts uphill and doesn’t change – 1 hour of fast hiking, following the park rangers. We finally catch a rest at the entrance to the park and our head researcher Veronica explains the gorillas are not used to people and may charge us, maybe even grab the camera. PIP executive producer Charlie Moore asks how we get the camera from the gorillas if they get their hands on it, but the answer is less than comforting: “if it feels like the gorilla’s pulling hard then let it go,” but “you’re welcome to try and rip it back if you care to give it a go.” I’m not sure I want to be the first CNN Photojournalist to have their camera smashed by a 400-pound gorilla (note: we do have a history with this sort of thing: PIP producer Mary Anne Fox had to request a new BlackBerry after it was crushed by the foot of an elephant).

As soon as the briefing is finished, the researchers get word that the gorillas have been spotted and are on the move – so are we. We clear the stone wall that marks the park’s border, and I quickly realize the walk to the wall was nothing compared to what’s behind it. The jungle is dense and the paths are slick. The sunlight shoots thru the forest canopy making the light for solid footing very tricky. As if walking wasn’t hard enough, I’m trying to film under these conditions.

TWO –hours later, we reach the spot where the gorillas are SUPPOSED to be – but they’ve moved further into the bamboo…completely off the trail. We immediately plunge down what seemed to be a 40-degree slope, and push father into the brush. We find the bamboo shoots left by the gorillas, then we reach a clearing and the hike PAYS OFF – there before my eyes are more than 40 mountain gorillas lazing in a clearing. There are just over 200 of the primates left in Rwanda so I’m looking at nearly 25% of the entire population here. The family is know as the “Pablo Group” – named after the silverback that just two years ago lost his dominant position but still commands respect (400 pounds of pure muscle will do that).

Time with the gorillas is precious because researchers want to make sure they don’t receive too much human exposure, which might make them susceptible to disease. One hour flies by and we say goodbye to Pablo and his family, then it’s back into the jungle. At least this time, IT’S DOWNHILL!

Out of the forest, we make the 2-½ hour drive back to Kigali, where I write this blog post. Next stop Cameroon – better get back to my gin and tonic elixir to ward of the Malaria!

Editor's note: You can read about this and other Planet in Peril stories here.
Neil and the rest of the Planet in Peril: Battle Lines crew are currently in Kigali, Rwanda, identified on the map below. 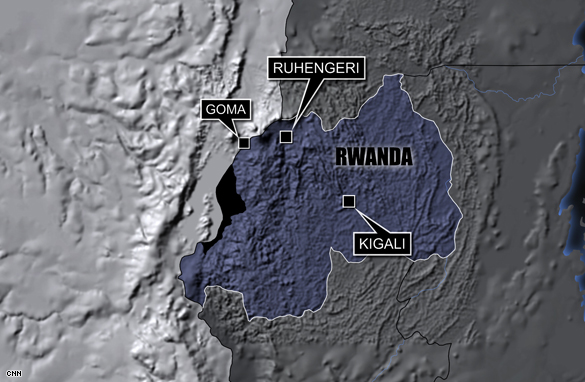