The best and worst in us 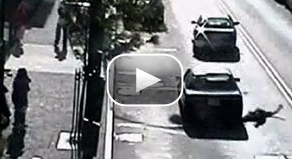 Surveillance video shows a hit and run and the lack of response from passersby.

During last night’s broadcast we were covering two breaking stories, and I was scanning the wires and web for any new information. That’s when I came across the traffic surveillance video showing a 78-year-old man being mowed down by a hit-and-run driver and then basically ignored as he lay motionless in the middle of a busy street while at least 10 cars drove by and a crowd of people gathered – at a distance. The first reports said that not one person called 911. The police chief in Hartford, Connecticut corrected those reports, saying four people had called 911 within a minute of the accident and EMS arrived shortly after.

I was relieved to hear that, but I’m still left wondering why no one in that crowd bothered to stop traffic while the man lay bleeding and cars swerved around him on the busy street. What’s more, the video shows some people not stopping at all as they walked down the sidewalk and glanced at the scene. Not one person approached the man to see if he had a pulse or needed CPR. No one even held his hand or offered a kind word.

Today the man, Angel Arce Torres, is reportedly fighting for his life – and like so many others, I’m obsessing about the obvious: Why did no one step in to help an elderly man so clearly and urgently in need – even if only to offer comfort?
Working in news can skew your perspective, dividing the world into random acts of kindness - and equally random acts of cruelty. Both types of stories are quick to make headlines. But something about this story cut through the clutter of all the other awful things we report on. It’s certainly fuel for my cynical side and a sad counterpoint to stories of selflessness.

Just two months ago here in New York, a mechanic jumped onto the subway tracks and bounded across the deadly third rail to rescue an intoxicated stranger who had toppled unconscious off the opposite platform. Afterward, the hero dashed back across the tracks to catch a train home, not even waiting for a thank you. It was reminiscent of last year’s dramatic rescue by Wesley Autrey, a 50-year-old construction worker and Navy veteran, who saved a teenager who had fallen off a subway platform after having a seizure. Mr. Autrey, without hesitating, jumped onto the tracks and covered the boy with his body as the train passed over them. Both survived, barely injured. Mr. Autrey’s two young daughters watched from the platform.

There's a lot of talk about change in this election year, with some people comparing the excitement Barack Obama is inspiring with the excitement that Robert F. Kennedy generated 40 years ago. But real change requires small acts of will every day in addition to legislative acts and leadership. The hit-and-run story gives me pause.

Yesterday was the anniversary of RFK’s assassination and the New York Times asked his children to write about their memories of their father. Kathleen Townsend Kennedy wrote movingly about RFK returning home from the Mississippi Delta, where he’d been conducting Senate hearings on poverty. She remembered him describing a family living in a one-room shack; the children were starving, bellies distended and covered with sores. Townsend-Kennedy recalled what her father told her that day: “You have a great responsibility. Do something for these children. Do something for your country.” She was 15 years old at the time. I read her op-ed piece in the morning, many hours before I saw the hit-and-run video. It seems to me the messages in each speak to the best and worst in us.

Father's Day is just a week away, and Mr. Torres remains in critical condition in a hospital. His son, Angel Arce Torres Jr., is named after him. Mr. Torres could have been any of our fathers. Did that thought not cross anyone’s mind as he bled in the street unattended?