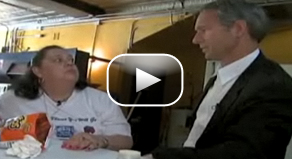 Having this blog site opens up a lot of opportunities for those of us who work on Anderson Cooper 360. It gives us the space and the time needed to take you behind the scenes and show you what happens before, during, and after we work on a story. And now is a good time for me to do just that.

On the day before the Kentucky presidential primary, we decided to do a story on poverty and politics. In travels around the country I have done since the primary and caucus season began, I have talked with many poor Americans who in high proportions, feel Washington hasn’t a clue about what they are going through. While many Americans feel people in abject poverty should just “get a job,” many of the poor truly want honest steady work, but for a variety of reasons, can’t get it. And now with four dollar a gallon gas, driving to find a job (particularly in wide-open rural areas) is prohibitively expensive. So with all that in mind, we decided to do a story on poverty and politics. We reported the story in Manchester, Kentucky, which is the county seat of Clay County, on the day before that state’s primary.

A day after our story aired, I received a letter from a Kentucky state senator. It wasn’t the warmest note I’ve ever received.

END_OF_DOCUMENT_TOKEN_TO_BE_REPLACED

It looks like payback time in Eldorado. Members of the secluded, polygamist sect felt vindicated yesterday when the Texas Supreme Court agreed state authorities did not have the right to take all 400-plus children into custody. But the FLDS families don't plan to go home quietly. Come November...they plan to vote.

I spoke at length with sect spokesman Willie Jessop about plans to register five to six hundred FLDS voters. Schleicher County has fewer than 19 hundred registered voters and no candidate is safe.

Sheriff David Doran, one of the leaders of the April raid at the YFZ ranch was the leading county vote-getter four years ago with just 903 votes. He's in for the re-election campaign of his life.

The County Commissioner from the precinct where you find the FLDS compound should also be worried. He ran unopposed four years ago and got into office with just 154 votes. Just a couple hundred write-in votes could conceivably land a sect member a seat on the county commission.

The Great Gig in the Sky

Bloggees – Today's driving tip: Do not take the Kennedy Expressway from downtown Chicago to O'Hare in a driving rain at 6:45 a.m. on a Friday.

Should you ignore this advice, at least avoid the cabbie who drives like a bat out of hell with a fogged-up window, talking into his bluetooth while laughing uproariously at an irritatingly cheery radio program featuring rude conversation from people invited to share why they want to dump their significant other.  Now, I know what you're thinking:  "Somebody is grumplestiltskin today."     END_OF_DOCUMENT_TOKEN_TO_BE_REPLACED

Tonight on AC360 Anderson goes knee to knee with Scott McClellan. The former White House staffer making all the headlines this week...You have heard all the reaction from the White House and the Bush Administration about McClellan's tell-all book, NOW hear from the man who wrote it...
THIS will be MUST SEE TV, folks...

Out on the campaign trail, there appears to be more preacher problems for Barack Obama...His name is Rev. Michael Pfleger, he gave a sermon this past Sunday from a pulpit in Chicago. Yup, from Trinity United, Obama's church. AND it was ALL caught on tape... Apparently, in his sermon he said Clinton's eyes welled with tears before the New Hampshire primary because she felt "entitled" to the Democratic nomination and because "there's a black man stealing my show." Pfleger said the former first lady expected to win the nomination before Obama's sudden popularity. "She just always thought that, 'This is mine. I'm Bill's wife. I'm white.' ... And then, out of nowhere, came 'Hey, I'm Barack Obama." And she said, 'Oh damn, where did you come from? I'm white. I'm entitled. There's a black man stealing my show,'" Pfleger has apologized for his remarks, BUT WHAT WAS HE THINKING? We will have the latest reaction to this preacher problem tonight...
END_OF_DOCUMENT_TOKEN_TO_BE_REPLACED