China: Children searching for their parents 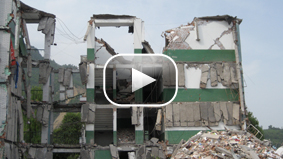 The earthquake in Sichuan has highlighted the particularly stark losses this tragedy has inflicted on the Chinese nuclear family. It's hard to convey just how close parents and their precious only child are here; they spend so much of their daily lives together in such small, shared spaces.

This quake struck when children were at school and parents were out working, and some of the most desperate emotions we are seeing now come from an incredible breach of the family unit.

One of the recurring cries from the parents, acknowledged by officials, is the shoddy construction of schools here, which has led to a disproportionately high number of young deaths – almost 7000 classrooms destroyed. In the town of Juyuan in Dujiangyan county, the middle school has completely collapsed, while apartment buildings right next door are still standing, with even the windows intact.

While I was there yesterday, a group of distraught parents fought their way into the roped off school grounds, demanding to find an official, a principal – anyone – to answer their desperate questions about how so many hundreds of their "wawas," or dolls, as they call their children here, could have been allowed to die at their desks.

Their bitter complaints are a common refrain here: They say they're happy with how the central government has responded so generously and quickly to their plight, but furious at the greed of local officials who they say regularly siphoned money out of school building contracts. The mood was volatile as the crowd swung back and forth suddenly between raw anger and even rawer grief.

Nearby in Mianyang County, more than 30,000 refugees are housed at Juizhou Stadium – the largest shelter in the region. Hundreds of makeshift tents circle the stadium, but the interior is reserved for 1000+ child survivors who have walked down from the gorges of Beichuan and beyond, and who have yet to find their parents.

For now there is no telling how long the children will be kept inside. A representative for the provincial government says that it will wait for two months before officially designating these children as orphans, and already more than a thousand people have signed up to be potential adoptive parents. We talked to a woman waiting to sign up who had lost her home in the quake. Her own child was grown, she said; she wanted to open her arms to another. Chinese families adopting Chinese children is very rare, but this disaster is exposing the naked need among parents to have something to love.

Victims are still pouring into the stadium from the mountainside; on Friday, six children straggled into camp, having walked for two days down from their mountainside village. They were in a state of shock: wide-eyed, silent, and refusing to eat. The children were immediately surrounded by a crush of 40 adults clamoring to touch them, to feed them. The loss of young life in any tragedy is unbearable. Here in Sichuan province, the recurring cry among the bereaved, the volunteers, the separated, for the thousands of children dead and for those who have made it through alive, is "Make way for the wawas!"