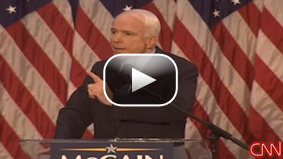 John McCain highlighted his plans as president Thursday and predicted the war in Iraq will be over by 2013.'

Sen. John McCain, the presumptive Republican presidential nominee, made a speech in which he envisions the state of affairs at the end of his first term if he is elected president.

"What I want to do today is take a little time to describe what I would hope to have achieved at the end of my first term as president. I cannot guarantee I will have achieved these things,"

In this speech he lays out benchmarks during his first term in office on which he could be judged.

"By January 2013, America has welcomed home most of the servicemen and women who have sacrificed terribly so that America might be secure in her freedom…”

"The Iraq War has been won. Iraq is a functioning democracy, although still suffering from the lingering effects of decades of tyranny and centuries of sectarian tension…"

“[The] threat from a resurgent Taliban in Afghanistan will be greatly reduced but not eliminated" ... U.S. and NATO forces will remain in the country "to help finish the job, and continue operations against the remnants of al Qaeda."

McCain envisions that Osama bin Laden, and his chief lieutenants, would be captured or killed.

He also believes that in 2013, there still will not have been a "major terrorist attack in the United States since September 11, 2001."

Here are a list of other milestones McCain hopes to see at the end of what would be his first term: