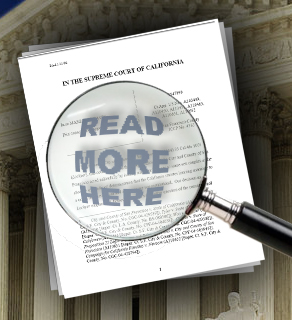 You can read the entire California Supreme Court ruling here

The ruling by the California Supreme Court this morning was one of the most hotly anticipated rulings in recent memory. This ruling essentially brought to a close the debate over the legality of same-sex marriages in California. The battle all began in 2004 when San Francisco Mayor Gavin Newsom surprised everyone by issuing marriage licenses to same sex couples in 2004. In the see-saw legal battles that followed, the issue seemed to polarize many, and it seemed no one was void of a view on the matter.

The crux of the issue is whether or not the State of California has the authority to legalize same sex marriage. The ruling today, following oral arguments in March 2008 in front of what is generally considered a conservative Supreme Court of California, was at first not quite as straight forward as the issue itself. The ruling began by stating essentially that the same-sex marriages conducted by the City and County of San Francisco were unlawful, but then went on to overturn the ban on same sex marriage in California. Essentially, past same-sex marriages we’re deemed unlawful, but could proceed going forward.

It would probably be fair to say that this ruling was met with a mild degree of surprise, if only because previous rulings seem to have generally gone against permitting same sex marriages in California.

With the legality question now settled, and opportunities to appeal exhausted, a few thoughts come to mind going forward.

Will the State of California once again serve as a bellwether for the rest of the nation? Certainly one would think not, at least in the most conservative parts of country. However, we’ve seen California in the past be an impetus for adoption in other states of its groundbreaking legislation, including on such topics as automobile emissions standards and medical marijuana.

I guess we’ll just have to wait and see. But once again, for better or worse, San Francisco is in the limelight of the national focus.