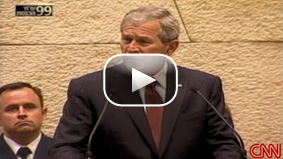 During a speech to the Knesset, Pres. Bush compares calls to talk with unnamed terrorist groups a 'foolish delusion.'

Wanted to get your thoughts on something that President Bush said today when adressing Israel's parliament, the Knesset, on Israel's 60th anniversary celebration in Jerusalem.

Some are saying the President launched a sharp but veiled attack on Sen. Barack Obama and other Democrats, suggesting they favor "appeasement" of terrorists in the same way some Western leaders appeased Hitler in the run-up to World War II.

The president did not say Obama's name directly (or any other Democrat for that matter) but White House aides privately acknowledged the remarks were aimed at the presidential
candidate and others in his party. Former President Jimmy Carter has called for
talks with Hamas.

"Some seem to believe we should negotiate with terrorists and radicals,
as if some ingenious argument will persuade them they have been wrong all
along,"

"We have heard this foolish delusion before... As Nazi tanks crossed into Poland in 1939,
an American senator declared: 'Lord, if only I could have talked to Hitler, all
of this might have been avoided.' We have an obligation to call this what it is
- the false comfort of appeasement, which has been repeatedly discredited by
history."

The remarks seemed to be a not-so-subtle attempt to continue to raise
doubts about Obama with Jewish Americans. Those doubts were earlier stoked by
Sen. John McCain, the presumptive Republican nominee in the 2008 presidential
election, when he recently charged that Obama is the favored candidate of the
Islamic fundamentalist group Hamas, which the U.S. government has listed as a
terrorist group.

Obama last week called the Hamas allegation a "smear" and lashed out
Thursday at Bush's speech in Israel.  In a statement release to CNN by his campaign Obama said:

"It is sad that President Bush would use a speech to the Knesset on the
60th anniversary of Israel's independence to launch a false political attack... It is time to turn the page on eight years of policies that have strengthened Iran and failed to secure America or our ally Israel...."

"George Bush knows that I have never supported engagement with
terrorists, and the president's extraordinary politicization of foreign policy
and the politics of fear do nothing to secure the American people or our
stalwart ally Israel..."

So what do you think? I have included a clip of the president's speech...