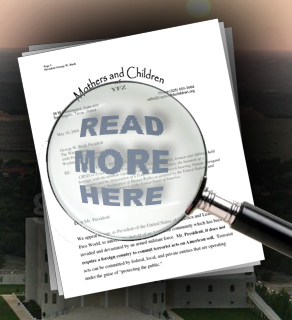 You can read the entire letter from the FLDS to the President here.

We've been busy with coverage of the WV primary, the situation in Myanmar, and the earthquake in China, but I wanted to share an interesting letter that was sent... to the president... from the FLDS.

The Yearning for Zion ranch in Eldorado, Texas, was raided last month by authorities acting on tips alleging physical and sexual abuse. The ranch is owned by the Fundamentalist Church of Jesus Christ of Latter Day Saints, a Mormon offshoot that practices polygamy.

Child welfare officials took more than 460 children and teens into state custody, where they remain.

Members of the sect deny allegations of abuse and say the raid was based on a hoax.

The letter to President Bush is signed by Willie Jessop, an FLDS elder.

"Mr. President, it does not require a foreign country to commit terrorist acts on American soil," the letter says. "Terrorist acts can be committed by federal, local, and private entities that are operating under the guise of 'protecting the public.' "

The letter says the April 3 raid on the compound was an "intrusive invasion" by "a heavily armed militant force."

"We are talking about homes being broken into without search warrants, unarmed fathers being forced to the ground with M16 rifles pointed at their heads, screaming children being torn from the arms of their grief-stricken mothers - all upon American soil and within your own home state of Texas," the letter states.

What do you think of the raid, and of this letter? You can read the entire letter from the FLDS to the President here.