Breaking news out of China tonight where a huge 7.9 earthquake killed 10,000 people – maybe more.  One expert told us that it’s the largest quake to hit the region "for over a generation."  We’ll have the latest on the damage and the relief effort live from the area.

And we’re counting down to the West Virginia primary.  Hillary Clinton says it will be a turning point in her campaign.  Will it be?  How could it be? We’ll have a preview from the best political team on television.

Be sure to check out our new live web camera from the 360° studio. The shot features Anderson and Erica behind the scenes on the set. We’ll turn the camera on at 945p ET and turn it off at 11p ET. LINK TO THE BLOG CAMERA

We’ll start posting comments to this blog at 10p ET and stop at 11p ET. 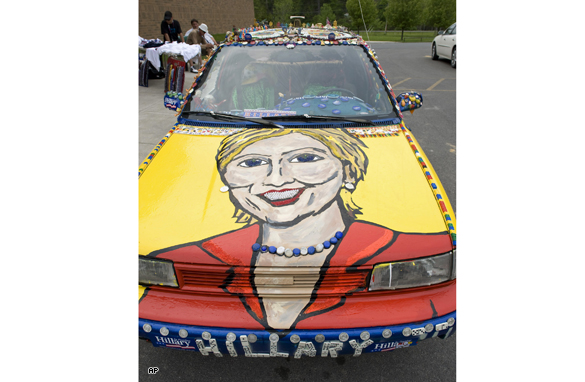 Just in time for West Virginia, Hillary Clinton gets the key endorsement of KITT from Knight Rider… Superdelegate ‘The Hoff’ remains undecided

Reporters Notebook: caught in the middle of Beirut's chaos

Editor's note: CNN's Cal Perry filed this reporter's notebook from Beirut, Lebanon about what it was like being caught in the middle of a fire-fight.  Here's the quick back-story:

The government threatened to dismantle a Hezbollah telecommunications network discovered at Beirut's international airport claming Hezbollah had installed cameras and other monitoring equipment at the airport. The government believes that Hezbollah was using the equipment to keep tabs on anti-Syrian government officials, possibly funneling the information to Syria. Syria has been accused of carrying out assassinations on anti-Syrian Lebanese politicians, a charge it vehemently denies.
___________________
[cnn-photo-caption image=http://i.l.cnn.net/cnn/2008/WORLD/meast/05/08/lebanon.hezbollah/art.tires.afp.gi.jpg caption="Government loyalists add tires to a burning barricade outside Beirut."]

Can’t stop thinking about what one of my former security advisors from Iraq said to me in a cafe here in Beirut just two days ago. “It’s quiet now Cal — but this is Beirut … at any moment, within 24 hours, the city and country could be thrust into complete chaos.”

Today, chaos is what happened.

The Hezbollah leader, Hassan Nasrallah, gave a speech in the afternoon, reacting to what the government had said about Hezbollah’s telecommunication network (a private network used by Hezbollah for communication.) It was exactly as expected — a fiery speech in which he said the government’s actions were tantamount to a declaration of war against his group.

After the speech we headed out into the streets to tape a brief “piece to camera,” while it was still light outside. Within minutes, deafening gunfire broke out all around us. A group of Lebanese Army soldiers starting yelling at us to come towards them and take cover behind a large building. The rounds were snapping close to us as we ran behind the building.

Cameraman Christian Streib, who has lived in Beirut for a decade, snapped into action — immediately filming. We tried to do a “piece to camera” but with all the gunfire, I could hardly hear my own voice. I found myself screaming at times, and gave up pretty quickly.

The firefight was raging when Christian spotted gunmen on a nearby rooftop. He remarked that he got it on film — something I still cannot believe. I kept telling him he was making me nervous as he filmed about, but the truth is he’s a seasoned as they get, and it was the simple gunfire, now coupled with large explosions from rocket-propelled grenades that was really making me nervous.

Read more of the blog

Friends and close associates of both Sens. Barack Obama and Hillary Clinton are now convinced that, assuming she loses the race for the presidential nomination, she is probably going to fight to be the vice presidential nominee on an Obama-for-president ticket.

Clinton "is trying to figure out how to land the plane without looking like surrender," a prominent figure in the Obama camp said Friday. This means, in all likelihood, bringing her campaign to a close in the next few weeks and trying to leverage her way onto an Obama ticket from a position of maximum strength, said several knowledgeable sources.

A person close to her, with whom her campaign staff has counseled at various points, said this week, "I think the following will happen: Obama will be in a position where the party declares him the nominee by the first week in June. She'll still be fighting with everybody - the Rules Committee, the party leaders - and arguing, 'I'm winning these key states; I've got almost half the delegates. I have a whole constituency he hasn't reached. I've got real differences on approach to how we win this election, and I'm going to press the hell out of this guy. ... Relief for the middle class, universal health care, etc.; I'm Ms. Blue Collar, and I'm going to press my fight, because he can't win without my being on the ticket.' "