The Clintons played the race card? A media-created Big Lie

Lanny J. Davis
Friend and supporter of Senator Clinton and fundraiser for her presidential campaign

It's bad enough that the charge of "playing the race" card against Senator and President Clinton is utterly and demonstrably false.

But so many African Americans have come to believe this bogus charge that Senator Clinton's favorable opinions in the black community have dropped significantly and many are telling reporters they won't support Senator Clinton in the general election if she wins the nomination.

The false perception that Senator and President Clinton interjected race into the campaign for political purposes is a direct result of distorted reporting by most of the media covering the race. Let's look at the facts behind the four incidents that, in a space of 1-2 months, led to converting the Big Lie into a perceived truth by so many Democrats, black and white alike: 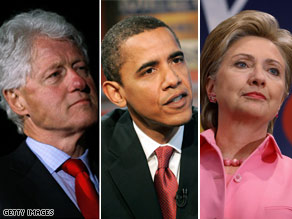 1.  The drug issue:  In December 2007, Senator Clinton's New Hampshire campaign chairman told a reporter he was worried about the Republican hate machine misusing Senator Obama's statement in his first book that he had experimented with drugs as a youth.  The campaign official immediately realized his error, apologized, and voluntarily resigned his position. Senator Clinton immediately personally apologized to Senator Obama.
Yet the media widely reported that the Clinton campaign was behind this statement as part of a deliberate effort to "play the race card."  There was never then, and is still not now, a shred of fact or evidence to support that charge.  Yet many African Americans believed it.
2.  President Clinton's "fairy tale" phrase: Just before the January 8 New Hampshire primary, the media repeatedly reported in print and on TV that President Clinton had described the "Obama campaign" as a "fairy tale." But this was another lie.
The "fairy tale" phrase, in fact, was used by President Clinton only to describe Senator Obama's description of his consistent opposition to the 2002 Iraq war vote and the conduct of the war, in contrast to Senator Clinton's record.
END_OF_DOCUMENT_TOKEN_TO_BE_REPLACED