They gave him money to fix his house. Now they want it back. 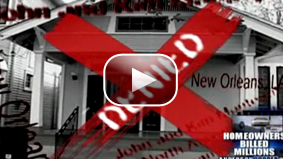 New Orleans residents affected by Katrina may have to pay back the money they were given in grants.

Every time I go to do a story in New Orleans I hold onto a little piece of hope that things are going to be better this time.

That the community is going to be more healed, that the town is going to look more alive, and that the programs put in place to help homeowners are actually doing so.

Well, I should have known better.

Imagine this: Louisiana residents – after all they’ve been through and all they’ve lost – are now being billed by the state for nearly $200 million!

Why? Well – it turns out the contractor hired by the state to dole out federal dollars designed to help homeowners rebuild... uh... well... how do I say this... OVERESTIMATED!!

The contractor, ICF International, may have overpaid as many as 5000 residents. In other words, the state gave these people too much grant money after state inspectors estimated home damages.

I interviewed a New Orleans man named John Montegut who had spent about $100,000 repairing his home. About $20,000 of it was from a state grant, part of that federally funded Road Home program to aid homeowners. Well, he just got a bill in the mail for $13,000 from the state telling him they’d overestimated his grant payment.

How’d that happen? Montegut told me the state’s inspector included in his damage claim the repair of six skylights (he doesn’t have any skylights!!) and the replacement of 22 windows which were far above the water levels and completely unharmed. Montegut says the inspector was in his house for five minutes and he was not allowed to see the damage claim so had no way of knowing what was included.

Here’s the killer: Montegut doesn’t have the money to pay the state. He spent that money fixing up his house. But he and every other homeowner who got a grant signed a contract with ICF agreeing to pay money back if overpayments were later discovered. Now remember, he wasn’t even allowed to see his paperwork. Montegut told me he never expected he’d owe the state money. But it turns out the actual cost of repairing his house was far greater than the grant anyway.

The contractor, ICF, told us it is a federally funded program and the state is demanding that it ask for repayments. ICF is promising a “compassionate process” and says it doesn’t expect a large number of families to be affected but we’ve learned from an advocate for the homeowners about 300 families have already been billed. The state plans to fine ICF for its mistakes and it plans to hire an auditor to review every case.

Is it cruel, as homeowners have said, to ask residents for money back after all their suffering following Hurricane Katrina? Or, as resident John Montegut told me, “They (ICF) made mistakes all along, why should people suffer?” What do you think? We'd like to know.