Pope's visit: Behind the scenes on 'Shepherd One' 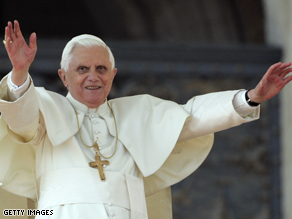 When Pope Benedict XVI touches down at Andrews Air Force Base tomorrow for the start of his April 15-20 pastoral visit in the United States, TV and radio commentators setting the scene are likely to refer to his plane as “Shepherd One.” The implied comparison to the U.S. President’s “Air Force One” is clever, but, alas, largely misleading.

In truth, there is no “papal plane” in the sense of a jet owned by the Vatican and used exclusively for papal travel. Instead, the pope flies on a regular commercial jet belonging to Alitalia, the Italian national airline, chartered by the Vatican for the period of a given trip. The pilots and crew are all Alitalia personnel.

Most of the passengers aboard the papal plane are actually journalists, representing a cross-section on the world’s major secular and Catholic media outlets. This time, 70 journalists are accompanying Pope Benedict to the United States, a figure which includes print reporters, TV and radio correspondents, producers, cameramen and photographers.

Journalists pay top dollar to fly with the pope – the roundtrip airfare this time is roughly $4800, comparable to a full-fare business class ticket for what usually amounts to economy class accommodations.

Media outlets are willing to spend that kind of money in part in hopes of privileged access to the pope. It’s customary for the pope to speak briefly with reporters aboard the plane on the outbound leg of the trip, usually shortly after takeoff. Under Benedict XVI, these have usually been fairly scripted affairs, with the pope’s spokesperson collecting questions in advance and then reading them to the pope, who provides an answer without the possibility for follow-up.

The lone exception was Pope Benedict’s May 2007 trip to Brazil, his only other trans-Atlantic journey so far. Since that flight was fairly long, the pope came back and conducted a real press conference. He took 11 questions from reporters, including queries about the excommunication of pro-choice politicians, liberation theology, and the beatification of the late Archbishop Oscar Romero of El Salvador. The questions had not been submitted in advance, and the pope’s replies were extemporaneous. From start to finish, the exchange lasted about 26 minutes.

Since the flight from Rome to America is of comparable length, reporters had been hoping for a similar exchange this time. Instead, however, the Vatican spokesperson sent out a request for proposed questions for the pope via e-mail. The plan is for the Vatican to pick five in advance, and then have the pope give answers on the plane. There’s unlikely to be much chance to ask follow-up questions or to press for additional comment.

From the outside, that might seem a curious choice, given that there’s plenty of time for a real press conference, and given that Benedict XVI is a veteran university professor who relishes intellectual give-and-take. Yet Vatican officials have long memories, and they recall well what happened on the Brazil flight. Pope Benedict answered a question about possible excommunication of pro-choice Catholic politicians in Mexico, seeming to endorse a hard-line position. That became the dominant day-one story of the Brazil trip, effectively blotting the pope’s formal message out of the sky.

This time around, it would seem that trip organizers are determined to keep the pope “on message” as he enters the world’s premier sound-bite culture.

Of those 70 journalists on the plane, 11 are Americans representing the following press outlets: the National Catholic Reporter; the Washington Post; Fox News; the New York Times; Inside the Vatican; Time; the Newark Star-Ledger; ABC News; the Associated Press; the Catholic News Service; and the Los Angeles Times.

(Yours truly is doing double duty as the National Catholic Reporter correspondent on the trip and also Senior Vatican Analyst for CNN.)