Gen. Paul Eaton: In Iraq, where is the cavalry? 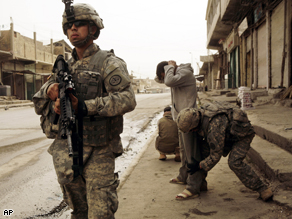 The Bush administration has chosen to abandon our under-equipped and over-burdened military to fight alone in Iraq.

After successfully alienating potential allies in the prosecution of our war in Iraq, this Administration continues to view our first truly interagency war as a purely military event.  The absence of credible State Department participation in this fight and the absolute failure of the rest of the Executive Branch to participate in this war leaves the entire burden upon the shoulders of our Soldiers and Marines.

To witness press and Congressional preoccupation with the military commander at this week’s hearings and mild interest in State’s man, Ambassador Crocker, one would surmise that they don’t understand, either.

Iraq is not the plains of Germany during the Cold War.  Iraq is an insurgency.

Our commanders need the application of the full power of the United States to bear upon the fight in Iraq.  We need a focused and determined Diplomatic Surge within Iraq - and without.  Every interested player –- and that includes all border countries, Israel and Egypt –- needs a seat at the table.  Interests need to be identified and let the negotiations begin.  Not unlike the Egyptian/Israeli accord or Dayton.

This is hard diplomatic work, and is apparently beyond our current Secretary of State’s intent or capability.  The recent example of Turkey’s attack into Iraq is the most recent indicator of our failure to work a competent diplomatic program.  A fully engaged diplomatic effort would address internal tensions that bedevil the Al Maliki government and foster competent internal government.

We need to get angry Arab men off the street, gainfully employed.  The rest of the President’s cabinet and their departments are very much needed by our military.  We need a reinvigorated Provincial Reconstruction Team program – new life to an idea that worked very well for the French in Algeria.  In the words of one commander, “I don’t need more combat troops, I need agriculture and water experts.”  Yet Commerce, Transportation, Education, Treasury and the rest of the President’s cabinet have been AWOL in this war.

General Petraeus was polite during the hearings.  He never once complained.  He never asked the President:  “Where is the cavalry?”