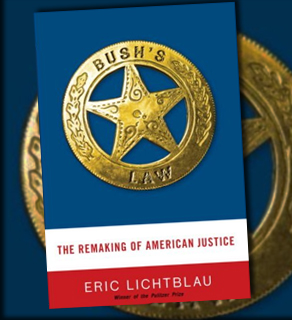 Eric Lichtblau, Pulitzer Prize-winning NY Times reporter and author of 'BUSH'S LAW: The Remaking of American Justice'  is an expert on the Justice Department. Lichtblau, along with his colleague James Risen, broke the original story on the warrantless eavesdropping program in 2005

The 2003 Justice Department memo released Tuesday night, asserting an overarching, almost unchecked view of the president's wartime power, needs to be seen in the context of the Administration's efforts to justify the rough tactics it had used on al Qaeda prisoners for the first 1-1/2 years in the war on terror.

As I discuss in my new book, "Bush's Law: The Remaking of American Justice," John Yoo - the author of the memo released this week on the treatment of prisoners and of a still-classified opinion on the NSA wiretapping program - was the White House's point man in the Justice Department and was responsible for writing almost all the key opinions asserting presidential authority.

Despite his growing prominence in the early years of the war on terror, Yoo wasn't particularly well-liked at the Justice Department. His critics there saw him as a brilliant but sometimes sloppy lawyer who was too often willing to do the bidding of the White House and the Pentagon.

Justice Department lawyers complained that even the Attorney General wasn't aware at times what opinions Yoo was giving the White House.

"It will take 50 years," a Justice Department official who was critical of Yoo's work told me for my book, "to undo the damage that he did to the place."

With many of the legal opinions from the early years of the war on terror still classified, it may take that long just to understand the tactics and legal tenets asserted by the Bush Administration.

– Eric Lichtblau, author and reporter for The New York Times