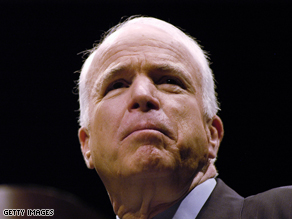 Tonight, we are going to air a piece about Sen. John McCain’s health. Truth is, it has been hard to get many details about the man, as his staff has not released his medical records since 2000. We know, as I’m sure you do by now, that if he wins, he will be the oldest president ever elected. He would be 2 years and 165 days older than Ronald Reagan was at the time of his inauguration. Though, I must admit, I love that his 96-year-old mother has occasionally been on the trail with him. He is making the point that he has good genes.

You have probably also heard McCain has malignant melanoma. Our research shows that if elected, he would not be the first president to have cancer. Grover Cleveland had cancer in his jaw. Reagan had both colon cancer and skin cancer, a less serious basal cell carcinoma, on his nose.  From what we have gathered, McCain has Stage IIA melanoma, which carries an average 10-year survival rate of 66 percent. Dermatologists say McCain’s odds are better because the odds improve the longer you go without a recurrence...

If you see the pictures of his face, you will no doubt see a scar running down the left side and persistent puffiness of his left cheek. This is from the aggressive operation he had to remove the cancer as well as the lymph nodes in the area, as well as part of his parotid gland. When we show those pictures to independent doctors, some have told us an operation of that magnitude would’ve been done only for a much more serious and aggressive cancer than IIA melanoma. Other doctors disagree, saying McCain’s aggressive operation may have been done out of an abundance of caution, where doctors removed more lymph nodes and other tissue than is normally done, because he is, well, John McCain.

Tonight, we will “show” you exactly what the senator had done and why. And, based on everything we know now, we will closely examine and dissect his health. But, the larger question I discussed with my staff today: Is this really important? How important is the health of  McCain or any of the candidates for that matter? Should the medical records be more forthcoming?

Editor’s Note: Medical news is a popular but sensitive subject rooted in science. We receive many comments on this blog each day; not all are posted. Our hope is that much will be learned from the sharing of useful information and personal experiences based on the medical and health topics of the blog. We encourage you to focus your comments on those medical and health topics and we appreciate your input. Thank you for your participation.