Sen. Barack Obama has called for a national discussion on race in America, and one of the folks who sure didn't hold back when asked was Secretary of State Condoleezza Rice. 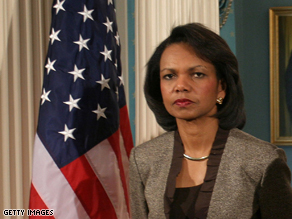 In a discussion with the editorial board of the Washington Times on Thursday, Rice called racism a "birth defect" of America, and said that black Americans have loved the nation even when it didn't love us.

“Black Americans were a founding population," she said. "Africans and Europeans came here and founded this country together — Europeans by choice and Africans in chains. That's not a very pretty reality of our founding.”

“As a result, Miss Rice told editors and reporters at The Washington Times, "descendants of slaves did not get much of a head start, and I think you continue to see some of the effects of that..."

Wow, was all I could say to that.

What was even more stunning was the relative lack of coverage on this issue.
I was told CNN's "The Situation Room" did a piece on her comments Friday.   But when I surfed the Net to see follow-up stories in other papers, it has pretty much been ignored, except for some briefs.

Why would the mainstream media be so dismissive of Rice's comments? Imagine if Rev. Al Sharpton or Rev. Jesse Jackson Sr. said such a thing. Do you think they would have gotten ripped?

The fact of the matter is that Rice was right on the money with her comments, and should be commended. She spoke honestly and openly about the issue, and deserves credit for speaking the truth.

I just wish my colleagues in the media would do a better job at advancing the issue of race in America and our sordid history.

We went bonkers about the Rev. Jeremiah Wright, but when Rice, the nation’s chief diplomat, spoke truthfully, it barely made a ripple.