Hillary Clinton has many admirable qualities, but candor and openness and transparency and a commitment to well-established fact have not been notable among them.  The indisputable elements of  her Bosnian adventure affirm (again) the reluctant conclusion I reached in the final chapter of A Woman In Charge, my biography of her published last June: 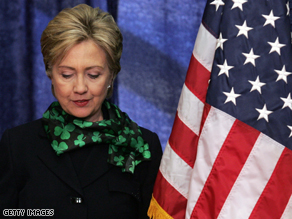 “Since her Arkansas years [I wrote], Hillary Rodham Clinton has always had a difficult relationship with the truth... [J]udged against the facts, she has often chosen to obfuscate, omit, and avoid.  It is an understatement by now that she has been known to apprehend truths about herself and the events of her life that others do not exactly share. " [italics added]

“Almost always, something holds her back from telling the whole story, as if she doesn’t trust the reader, listener, friend, interviewer, constituent—or perhaps herself—to understand the true significance of events…”

The Bosnian episode is a watershed event, because it indelibly brings to mind so many examples of this tendency– from the White House years and, worse, from Hillary Clinton’s take-no-prisoners presidential campaign. Her record as a public person is replete with “misstatements” and elisions and retracted and redacted and revoked assertions...

When the facts surrounding such characteristic episodes finally get sorted out - usually long after they have been challenged - the  mysteries and contradictions are often dealt with by Hillary Clinton and her apparat in a blizzard of footnotes, addenda, revision, and disingenuous re-explanation: as occurred in regard to the draconian secrecy she imposed on her health-care task force (and its failed efforts in 1993-94); explanations of what could have been dutifully acknowledged, and deserved to be dismissed as a minor conflict of interest - once and for all - in Whitewater; or her recent Michigan-Florida migration from acceptance of the DNC’s refusal to recognize those states’ convention delegations (when it looked like she had the nomination sewn up) to her re-evaluation of  the matter as a grave denial of basic human rights, after she fell impossibly behind in the delegate count.The latest episode - the sniper fire she so vividly remembered and described in chilling detail to buttress her claims of  foreign policy “experience” - like the peace she didn’t bring to Northern Ireland, recalls another famous instance of faulty recollection during a crucial period in her odyssey.On January 15, 1995, she had just published her book, It Takes a Village, intended to herald a redemptive “come back” after the ravages of health care; Whitewater; the Travel Office firings she had ordered (but denied ordering); the disastrous staffing of the White House by the First Lady, not the President - all among   the egregious errors  that had led  to the election of the Newt Gingrich Congress in 1994.On her book tour, she was asked on National Public Radio about the re-emergence of dormant Whitewater questions that week, when the so-called “missing billing records” had been found. Hillary stated with unequivocal certainty that she had consistently made public all the relevant documents related to Whitewater, including “every document we had,” to the editors of the New York Times before the newspaper’s original Whitewater story ran during Bill Clinton’s 1992 presidential campaign.

Even her closest aides - as in the case of the Bosnian episode18 years later - could not imagine what possessed her to say such a thing.  It was simply not true, as her lawyers and the editors of the Times (like CBS in the latest instance) recognized, leading to huge stories about her latest twisting of the facts. “Oh my God, we didn’t,” said Susan Thomasas, Hillary’s great friend, who was left to explain to the White House lawyers exactly how Hillary’s aides had carefully cherry-picked documents accessed for the Times in the presidential campaign.  The White House was forced - once again - to acknowledge the first lady had been ‘mistaken;” her book tour was overwhelmed by the matter, and Times’ columnist  Bill Safire that month coined the memorable characterization of Hillary Clinton as “a congenital liar.”

“Hillary values context; she does see the big picture. Hers, in fact, is not the mind of a conventional politician,”  I wrote in A Woman In Charge. “But when it comes to herself, she sees with something less than candor and lucidity. She sees, like so many others, what she wants to see.”

The book concludes with this paragraph:

“As Hillary has continued to speak from the protective shell of her own making, and packaged herself for the widest possible consumption, she has misrepresented not just facts but often her essential self.  Great politicians have always been marked by the consistency of their core beliefs, their strength of character in advocacy, and the self-knowledge that informs bold leadership. Almost always, Hillary has stood for good things. Yet there is a disconnect between her convictions and her words and actions. This is where Hillary disappoints. But the jury remains out. She still has time to prove her case, to effectuate those things that make her special, not fear them or camouflage them. We would all be the better for it, because what lies within may have the potential to change the world, if only a little.”

The jury - armed with definitive evidence like the CBS tape of  Hillary Clinton’s Bosnian adventure - seems on the verge of returning a negative verdict on her candidacy.

– Carl Bernstein, 360° Contributor Editor's note: Read other blogs from the 360° team of contributors at cnn.com/360