Beyond the repetitive cable TV news loops of Barack Obama’s clergymen, Hillary Clinton doesn’t have a lot going for her as she faces the fight of her life in Pennsylvania. 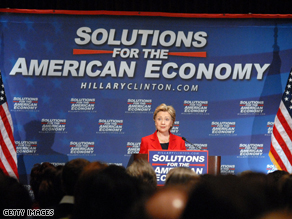 She managed to pull out a win among working class whites in Ohio with a populist pitch claiming that she’d opposed the NAFTA agreement that was the centerpiece of her husband’s trade policy.  That particular hat trick is a little harder to repeat in the Keystone state, however, since a Freedom of Information Act Request has now forced her to open up her records as First Lady. These prove that she actually hosted meetings in support of NAFTA at that time. (See David Sirota’s blog post on the subject.)

This time, however, the policy wonks’ desperation move is just like the troubled mortgages it seeks to address: it’s upside-down, an amalgam of policy prescriptions borrowed from other Democrats, together with others that are already happening anyway, no thanks to Hillary Clinton.

For instance, Clinton’s team has Xeroxed a proposal by Rep. Barney Frank (D-MA) and her former opponent, Sen. Chris Dodd (D-CT), to expand the Federal Housing Administration’s ability to purchase and restructure mortgages that have, in today’s parlance, “gone underwater.”

Unsurprisingly, however, this is already being done without Hillary Clinton. The FHA is already trying to get as many homeowners as possible under its umbrella, and it is the loan companies, not the government, that will have to make the call whether to write down the troubled notes. Furthermore, according to a report by David C. John at the Heritage Foundation, the Frank-Dodd approach will not stop foreclosures, even for those who qualify—rather it offers a “government buyout of problem mortgages disguised as a refinancing plan.”

New York’s junior Senator was particularly self-righteous when she demanded that the President form an “emergency working group” to study how to establish “broad restructuring” of the at-risk mortgages.  This, too, is already happening. The HOPE NOW Coalition has been working at restructuring these loans since last fall.  It now includes 90 percent of the sub-prime mortgage servicers, and in less than a year, the industry has already restructured mortgages to save more than 1 million families from foreclosure.

It shouldn’t come as a surprise that any policy prescription from Hillary Clinton includes a hefty price tag.  In this case, she proposes an additional $30 billion so local governments and non-profits can buy and re-sell foreclosed properties to low income families or convert them into rental units.  This is on top of the $168 billion stimulus package that was just signed into law (which Clinton claimed contained “nothing” to address the housing crisis).

On this score, she’s wrong on both points.  First, the stimulus package at least increased the limits on FHA loans, - in fact, FHA has pumped almost $50 billion of liquidity into the housing market in just the last six months.  What’s more, Community Development Block Grants already allow the states and local governments to use federal dollars for the purchase, re-sale or rental of foreclosed properties at risk. (As an aside, HOPE NOW has supported a toll-free hotline, 1-888-995-HOPE to provide mortgage counseling in multiple languages.)

At a time when more and more folks have the jitters about the economy and making their mortgage payments, it’s important to separate fact from political theatre. Our role should not be to overcorrect the economy or to make the federal government to a realtor of last resort.

– Leslie Sanchez, spokesman and deputy press secretary at the Republican National Committee during the 2000 presidential campaign, author of “Los Republicanos: Why Hispanics and Republicans Need Each Other.”